Eden Bradley has a new book releasing today called Fallen Angel. Is this cover not awesome? 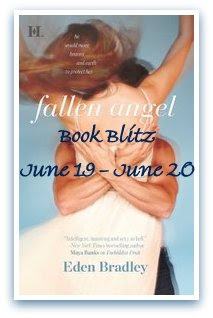 “Was she heaven-sent…or more heartbreak waiting to happen? Haunted by a military mission that ended in personal tragedy, Declan Byrne still bears a soldier’s scars. As a park ranger on the secluded Mendocino coast, he guards his heart while standing ready for anything. Anything except a beautiful, ethereal woman with a mysterious past, falling from the cliffs to the rocks below. Angel, as Declan decides to call her, has no memory of what happened. But as her body heals, disturbing dreams emerge. In Declan’s protective care, Angel feels safe to act on the undeniable passion between them, without the threats from old, unnameable demons. And, in time, she senses Declan needs her as desperately as she needs him. But when her past returns with a vengeance, Declan must decide just how much he’s willing to risk in order to keep the woman he loves safe.”


“He sat up. They were in his bed, the moonlight shimmering through the curtains, striping the room in light and shadow. But he could see her clearly, her naked body kneeling next to his, her long hair like a veil around her shoulders, flowing over the curve of her breasts.

He was still pulsing with his orgasm, his cock thrumming, his body hot. And she was really there. In his bed, wiping her lips with the back of her hand.
Jesus.
He was shaking. What the hell had just happened? What had he let happen?
“Angel. What’s going on? What are you doing here?”
“I’m here to make you happy. To show you there is no reason to deny your desires. Or mine. Have I not made you happy? Your body is happy. But I still need you, Declan. I need you to touch me.”
“Jesus, Angel. I can’t believe this.”
“I’m real. I’m a woman, Declan, not a child. And I want you.”
She took his hand, and before he knew what she was going to do, she held his palm to her breast.
Jesus. Her flesh was warm, her nipple going hard beneath his fingers. He couldn’t force himself to pull away for a moment. When he finally tried to, she held on tighter.
“Please, Declan. Please don’t send me away again. I need you. And you need me. You cannot tell me you don’t.”
It was nearly impossible to think, his brain still half-dazed from coming. But he had to say something. Had to do something.
“Angel, this is not right. I can’t do this. We can’t do this.”
“We already have, Declan. And it was beautiful, as I knew it would be.”
He swore he could feel her pulse beating in the full flesh of her breast as she leaned into his touch.
“I’m here for you. For you, Declan. This is where I am supposed to be. You can’t tell me this is wrong. I won’t believe it. I love you, Declan.”
Love.
Jesus. Why did hearing her say that to him make his heart pound right out of his chest? His mind was going a hundred miles an hour. “You don’t know what you’re saying, Angel.”
“You cannot deny you feel something for me.”
He couldn’t.
God damn it.
“Of course I do! But this is…I don’t know anymore.”
“Feel this, Declan.” She held his hand closer, crushing her breast beneath their twined fingers. “Feel how my body heats for you. Feel my desire.”
She moved his hand down, over the soft cushion of her stomach. Lower still, in between her thighs. He was helpless to stop her. And when she slipped his fingers into her sweet, wet cleft, he was paralyzed.
“Ah, God…”
She sighed quietly, her breath coming out in a warm puff of air that grazed his cheek like a kiss.
“You are the first man to touch me, Declan. And it is better than anything I could have imagined. Your hand feels so different than mine. Larger. Stronger. And yours.”
She held him there, pressed against her mound. His heart was beating wildly. Totally out of control. He was out of control. Fucking helpless.
“I need you,” she said again. “I need you to touch me, Declan. I need you to quench this thirst. I feel as if I’ll die of it.”
Holding onto his hand with both of hers now, she slid it back and forth, over her cleft. Her flesh was soaking wet, slippery. And all he wanted was to touch her, taste her. Have her.
He knew in his head it was wrong. But his body felt right.
He couldn’t resist any longer. He could not do it.
“Declan, please have me. I will beg you until you do.”
Her hips were undulating against his hand, and he moved then of his own accord, sliding his fingers into her wet heat.
“Oh…” Her voice came out on a soft, whispered sigh.
“Angel.” His voice was gruff, thick with desire in his own ears.
“Yes…”
“I want you.”
“Yes, Declan. Now.”

Eden is fabulous enough to offer up a giveaway to one lucky commenter the choice between one of two ebooks (and you know what that means-International Giveaway!!). Just comment and leave your email to be entered. Tweeting or Facebooking the post are always appreciated, but not necessary.  Contest runs from June 19-June 26. 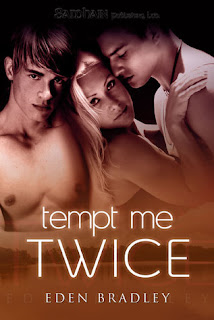 “One hot man is good. Two’s double the fun…until your heart gets involved. Jessie has been in love with her bisexual best friend, Paul, since their college days. He’s never made a move on her, though, and at this point she values his friendship too much to risk revealing her feelings. Especially since now he has a new male lover and seems so happy. Paul and Noah have only Jessie’s rest and relaxation in mind when they invite her along on a camping trip to Lake Tahoe. She’s been pretty stressed out preparing to show her art at a major New York gallery. A weekend getaway will do her a world of good—and they won’t take no for an answer. Jesse thought she’d be nothing more than a third wheel on this trip. But Noah is as sweet and hot as Paul, and their first night turns into a heated tangle of bodies in the dark tent by the lake. It’s an erotic, intense experience that must come to an end. And when it does, will she still have her best friend?”

“Love with a beautiful stranger isn’t so strange-if you believe in destiny. Celestial Seductions, Book 1 Clinical psychologist Destiny Walker considers herself far too logical for any of that “soul mate” nonsense. Even if her beloved, dearly departed Nana insisted she was going to meet hers someday. When a sudden downpour sends her ducking into a psychic reader’s storefront-and the woman confirms everything her grandmother said-doubt begins to sneak into the corners of her mind. A chance meeting-more like a collision-with Superman look-alike Reece Kellan sets off a sexual chemistry reaction the likes of which she’s never felt. She isn’t prone to falling into bed with strangers, but he does things to her body that leave her breathless…and unsure where her pleasure ends and his begins. And that’s the part that scares the hell out of her… This book has been previously published and has been revised and expanded from its original release. Warning: Dirty sex with a stranger, a little anal play, more dirty sex, sex on the kitchen table, more dirty sex (because really, can you ever get enough?) and even love at first sight-shocking.”

Forever Mine by Donna Grant