How to Wed a Baron by Kasey Michaels

Although I received this book as an ARC through Netgalley, it released Dec. 1

4.5 stars and small SPOILERS for the sake of summary:

Anyone who has been following know that I have issues with this series. I read the first book How To Tempt A Duke and I loved it. I loved it so much I bought the whole series. I was so incredibly disappointed in the second book How To Tame a Lady that the only reason I kept on was because I’d paid for the books. The next one How to Beguile a Beauty was better, but really the breakout star of that book wasn’t the hero or the heroine, it was Justin Wilde, the Bad Baron. Well, his book is fabulous. This is what I would expect from Kasey Michaels.

Justin is the Crown’s (unwilling) Assassin. His beautiful wife was very indiscreet with her affairs, and Justin ended up meeting someone at dawn. Well, not only is dueling outlawed, the other guy turned early. Justin heard the shout and shot in self-defense…but he fired on 2, killing the man, therefore, he became exiled, and his wife tragically (and unrelated) died falling down some stairs. Wanting nothing more than to go back home to his beloved England he does the Crown’s bidding until after 8 years he is finally allowed home.

Unfortunately “home” isn’t happy to see the Bad Baron. His friends snub him, the ton loves to hate him. Only a few steadfast friends and his dear valet Wigglesworth stick by him.

*And a quick sidenote on Wigglesworth: he stole the show. He was such a fun and quirky character I cannot tell you enough how fabulous his parts were…especially when he went incognito through a gypsy camp dressed as a woman. Priceless.*

But back to Justin, a stipulation of coming home is that he must be at the Prince Regent’s beck and call…oh and call he does. Prinny finds some convoluted plot to force Justin to wed an Austrian noble, who’s more English than Austrian, and then Justin must keep her safe from those who want her dead.

Justin hates being told what to do, and this plot from Prinny is only accepted because he would end Justin’s servitude. Justin cracked me up. He plays the dandy, but is truly dangerous when he’s at his most witty and charming.

Enter our lovely heroine Alina. Alina is a fantastic character. She is lively and young, but not so young as to be silly. She grows into her character, and into her love. And falling in love with Justin is not easy. He decides he cannot marry her, for her own good of course. See, she doesn’t know this, but the man Justin killed in the duel was her uncle. Even after telling her all this, she realizes that Justin truly does believe himself to be an awful, soulless, man. So she sets out to seduce him.

With a little help from the couples we’ve seen throughout the series, Justin and Alina finally do come together. He took care of the threats against Alina but not as one would assume. And of course, there was the HEA.

I loved this book, and I loved the main characters. Oh! And I finally figured out what the heck a “curly brimmed beaver” is!

This my friends, is a curly brimmed beaver: 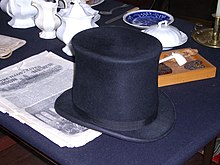 Lord of Shadows by Alix Rickloff

My name is DemonLover and I’m a Book-o-holic…