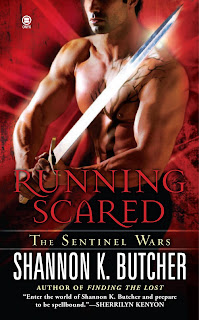 First let me start with saying that this book doesn’t actually release until May, but Shannon K. Butcher was nice enough to send me a copy to review. For those of you that have taken my advice and ran out to get the first 2 books in this series; Burning Alive and Finding the Lost, terrific. For those who haven’t yet, I’ll try not to reveal too much.

This 3rd book in the series is called Running Scared and in it we re-visit the character Lexi, the spunky waitress and Helen’s friend from the diner and Zach, the Sentinel warrior that has been obsessed with her since they first met there.


In the first book, Lexi is on the run and believes that her friend Helen has been kidnapped by the men from the diner. She is doing everything possible to keep any of those men, the Sentinels from finding her. She was brought up with the belief that the Sentinels were to be feared, that they only wanted to enslave humans, drink their blood and feast on their bodies.

Zach has been crazed with the notion of finding Lexi, he knows that she is the ONE. She is a woman of his race, one of the Theronai, the one woman that can save his soul. He will do anything to locate her and make sure she is safe with him and the other Theronai.
The heroine in this was so frustrating; she was so negative and unconvinced by any actions Zach made to show her his true intentions. This warrior bends over backwards to assure her that he is the good guy, but still Lexi plots behind his back. She then endangers the entire Theronai compound, Zach and herself in the process. I always lean toward the rule of “gather the evidence” and “give the benefit of the doubt”, but doubt seems to be the one emotion that she clings to. Lexi has built a wall around her, her heart and blocked out her emotions. Zach definitely has his work cut out for him in cracking this nut.

We will discover two amazing developments in this book; one is that the reason for all the Theronai men being sterile, is not due to their enemy the Synestryn; but because of one of their own. Second, we learn that the Theronai women are not so rare, there’s more to be found and some of them are even related. Things also get a little steamy between Torr and Grace, I can’t wait to find out what happens to him and if they can cure what has paralyzed his body from the neck down.

The characters and the stories keep evolving and I for one am hooked and cannot wait to find out what happens next. The 4th book in the series is titled LIVING NIGHTMARE and scheduled to release in November this year. This book will finally tell us the whole story of Nika and Madoc, hopefully relieving some of the growing tension and finding a solution to saving Madoc’s soul.
Great Book!
4 STARS

Day 7 in the Book-a-day Giveaway

OMG…Look at the NEW DL bookmark