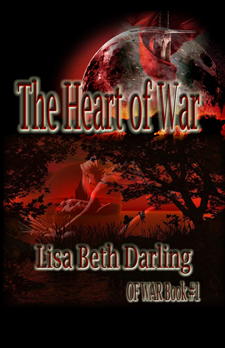 Author Lisa Beth Darling is at Got Fiction today to talk about her Of War series.  I have loved this series so far, but I’ll let Lisa tell you all about it.

Heather: Hi Lisa, can you give us a quickie description of us the Of War series to get started?

Lisa: It’s so hard to condense the whole thing into a quick description so I’ll just hit some of the major points: 1- The Olympians are absolutely, some might even say ‘divinely’, dysfunctional as a family and on their own share a long sordid history with Faes and Celts having once been the creators, the masters, and owners of the willowy women who escaped their grasp.

2-We learn that the Fae branch off into at least two groups; The Fae of the Dark Kingdom who are ruthless in their treatment of their own men and the Fey of the Golden Lands who frolic and play among the trees and forests under the protection of Cernunnos. Yet, the protection of the Lord of the Forest doesn’t come at a small price, every twenty years or so he arrives at the treetop village to take his pick of their women.

3- Ares defies his family and spits in the face of their history by impregnating and then marrying Magdalena MacLeod—Alena—who is at least half Fey.

4-Raven, the son of the God of War and Alena, grows to be a very angry and disturbed young man. Growing up on Olympus isn’t easy when everyone despises you just for being born. Raven’s anger turns on Alena with great consequence but it is directed by the whispered lies of his Uncle Apollo who has struck a bargain with his Father, Zeus, to rid Olympus of the half-breed and his filthy Fey mother.

5-Apollo has his own plans. Behind Zeus’ back he uses Raven to help bring about the destruction of the world as we know it. When the World Economy collapses and riots break out in the streets, Raven is there to lead the masses, to teach them the ways of war and sabotage, and to spur them on until anarchy reigns supreme.

Heather: How did you come to write about these mythological characters?  Where did the idea come from?

Lisa: I fell in love with Greek Mythology in a high school English class. Given my nature and my personal bent, of course I was drawn to Ares.  Being a Libra, I’m not a violent person but if you piss me off you are going to know it. When and if a situation calls for it I can be ruthless.  I saw in Ares the same qualities more than I saw a warmonger who just went around creating war to have something to do as he is so often portrayed.

A few years went by, I got married, had kids, and “Hercules The Legendary Journeys” became a staple of viewing in our house.  It rekindled my love of Greek Mythology which I’d gotten away from by then being a busy wife and mother and a struggling writer.  Two or three seasons into the show Ares burst on the scene and knocked my socks off.

The character incorporated himself into many of my works long before the OF WAR Series came along.  He was minor character near the end of a few books and, for several years I wrote a fanfiction series entitled “Daughter of the Gods” wherein Ares and eventually the entire Greek Pantheon became major/minor characters.

When I stopped writing that Stargate SG-1 based series Ares stayed with me through several more stories until he began screaming for his very own story. I don’t know if you’ve ever seen the God of War cross his arms over his chest and pout but I can tell you it isn’t a pretty sight.  We wrote “The Heart of War” strictly for our own personal enjoyment never intending it to leave the hard drive or to become a series.

Now here we are four years, four novels and one short story later with the fifth and final novel in the series “Kingdoms of War” coming out in March.  It’s been quite a ride.

Heather:  It has been quite a ride!  The Of War series is a very dark series.  How do you balance out the violence of the story?

Lisa: With a lot of humor although, admittedly, it also tends to dark and, of course, we all know that For Every Action There Is An Equal and Opposite Reaction so when the good guys get even it’s always a spectacular defeat for the bad guys. I try to make the redemption or vengeance a tad bit larger than the abuse suffered or wrong done.

Heather: Since your books are all mythology based, what is your favorite Greek Myth and why is it your favorite?

Lisa: All of the books in the OF WAR Series are mythology based but that doesn’t apply to all of my books. I have several non-fiction works out including a photography book and my other novels, such as my latest release “OBSESSION” and “Dream Weaver”, are contemporary. They center on fairly normal people in extraordinary situations.   My favorite myth is probably Icarus who flew too close to the sun with his wax wings.  It reminds to go for my dreams but never to let ambition blind me to the simple truth lest I crash and burn.

Heather: What is your writing process?  Are you a “pantser” or a plotter?  Do you have a certain writing ritual?

Lisa: I have to have all of my tools; cigs, coffee, incense, candles and maybe something cold to drink along with my iTunes.  I always have a general idea of the story in mind, the major points I want to hit and scenes I want to write. I never plan anything out anymore it got to be a real chore so I ditched it.  Now when I write it’s sort of like playing a huge and winding game of Connect The Dots. Only the dots are in my head instead of on paper. Getting from one to the next is much like walking over slippery stones but there’s always a way to get to the next dot (scene, plot point) I just have to find it. There’s where inspiration takes over and banishes logic and charts and graphs.

Heather: Do you have any special Holiday traditions in your house?

Lisa: I still make my mother’s and grandmother’s cookies along with my grandmother’s pumpkin bread. Other than that, our children are full grown adults and we don’t yet have any grandchildren so the Winter Holidays have become quite relaxed and I get to fully revel in the Peace of the Season.  A little shopping and a little cooking, some good friends and good wine, we’re all set.

Heather: Would You Rather have to sing Jingle Bells (full-out) every time you walk into a room for a week OR Wear a full Santa Suit everywhere you go for a week?  Why?

Lisa: I’d probably wear the Santa Suit. I’d like to see the little children’s eyes light up when they see me and I only sing in the shower, alone the car, or when making dinner. Trust me when I tell that that’s a very good thing!

Thank you for the interview, Happy Holidays to you Lisa!

Happy Holidays to you as well, my friend. Thanks so much for having me here today. Have a warm and bright 2014.

Readers, to learn more about Lisa Beth Darling and her books, you can follow the links below:

For paperbacks the best deals are always on my site! Also available on Amazon.com

Lisa is generously sponsoring a giveaway with this interview today!  1 Winner will receive 1 SIGNED paperback of “The Heart of War” US ONLY, 18 and older only.  Contest will run from today December 5 through midnight December 11, 2013.  To enter, leave a comment on this post (comment on the interview, answer the would you rather, share your favorite myth, etc).  After commenting, fill out the rafflecopter below!

12 Days of Giveaways is coming on Black Friday!

Escape to Romance with Shana Abe