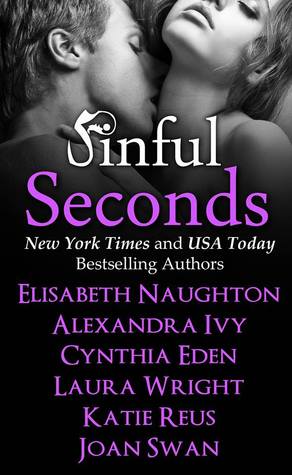 From the six USA Today and New York Times bestselling authors who brought you WICKED FIRSTS, comes an all new contemporary set of six sexy, suspenseful and very SINFUL SECONDS.

SINFUL SURRENDER by Elisabeth Naughton
He's been watching her, and now he's here, in the dimly lit bar of the swanky Vail resort, pretending not to notice her. Songwriter Grace Ryder has never liked the spotlight, but her skin tingles whenever his sexy gaze drifts her way. Only one night will prove whether he's safety or sin.

Aegis operative Brian Walker's orders are clear: observe, but don't touch. Things change, though, the moment the leggy brunette makes him an offer he can't refuse. Desire leads to seduction, but it comes at a price. Because someone wants her dead, and if Brian's not careful, his obsession for a woman he never should have touched could get them both killed.

SINFUL RAPTURE by Alexandra Ivy
Holly Sullivan has always been the good girl, but when her fiancé jilts her at the altar she spends her non-wedding night at The Playhouse indulging her deepest desires.

Liam fell in love with Holly at first glance. Unfortunately, she hates him for buying her father's business. Following her to The Playhouse, he devotes the night to fulfilling her fantasies. But will she forgive him when his secret is revealed?

SINFUL IN SPURS by Laura Wright
Champion bull rider, Sawyer Black has one goal when he isn't competing in the arena: watch out for his best friend's little sister. But Keely is turning out to be anything but cooperative. The once shy, small town girl has turned into a gorgeous and very stubborn hellcat with big city excitement on her mind. And when Sawyer returns from a rodeo to find her gone, he knows he will do anything it takes to bring her home.

Keely O'Hare is sick and tired of her brother's best friend babysitting her. It's her final year of college and she's ready to explore the dark sexual needs she's been keeping secret in her heart. So when Sawyer goes away for work, Keely escapes to the city and to the notorious sex club, The Playhouse. But when Sawyer finds her there, unexpected and explosive sexual tension flares hot and heavy between them--and Keely refuses to return home with him until he spends two nights in The Playhouse with her. If he wants to bring along his bull rope? Even better.

SINFUL SEDUCTION by Katie Reus (Red StoneSecurity Series)
As an heiress from a prominent family, Mina knows the pain of living under a microscope. Which is why she loves her sleepy Key West home where nobody knows her name. She's determined to make her way without being coddled--and no mugging is going to change that.

Former Marine Alexander Blue has seen enough bloodshed to last a lifetime. When he sees a mysterious brunette attacked by a mugger, his need to protect kicks into overdrive. Mina brings him home and bandages him up, but her gaze cuts clear to his soul. An intense connection isn't all Blue feels--he's convinced Mina needs his protection. Just one problem: Mina doesn't want saving.

SINFULLY SCANDALOUS by Joan Swan
In need of fast cash to help her brother sneak into the US, Tova Sorenson takes a job as a sexcam operator, sparking an unlikely friendship with her very first customer. When Marcus Lucero's border patrol teammate suggests a sexcam site for female companionship without heartache, Marcus figures he's got nothing to lose.

While danger from Tova's dark side brings them together in the flesh where their chemistry burns hotter than hell, it also exposes their divergent loyalties which could end not only their desires, but

UPDATE: Cynthia Eden has just offered 2 copies of Mine to Crave to a couple of our lucky commenters! You know the drill-comment to enter! I’ll pick the winners through random.org