I had the amazing experience of going to Sherrilyn Kenyon’s book signing and she is just a lovely lovely woman! And so easy to talk to!

So in this review, I thought a little photo of the two of us might be fun 🙂 Also, Dianna Love was there, and that woman is hysterical! She had us all cracking up. 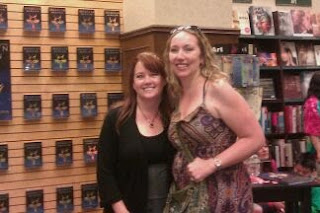 So, moving on to the [Spoiler Free] review.

Born of Shadows picks up in the same time as the first two books took palce- Born of Night and Born of Fire which I felt was refreshing since I liked the next generation of the League, but there was so much to work with in the first cast of characters.

When Born of Shadows opens, it is right into an action scene. There’s like 60 pages of intense action and an almost execution before the storyline picks up with Caillen meeting Desideria.

We know a lot about Cai from the previous books, but it was cool being able to see his backstory. And to see why he was the way he was.

Desi is a princess from a planet of warrior women-and I thought the concept of how they became warriors was so cool. Basically a few hundred years ago, they got their butts kicked in battle. Seriously kicked. Since most of their men had been killed, they had women…so the women focused on becoming better warriors. I would compare them to the Amazon race, but the real Amazons, the ones who cut off their right breast to become better with a bow. These women were hard. Compassion got you killed, therefore compassion was a pointless emotion. Desi’s mother the queen was no different. She was not soft, she didn’t hug Desi, there was no preferential treatment, so when Desi earned her way to the elite guard, she really earned it.

Now the only thing that bothered me is how naive the young women were kept. Isn’t the number one rule in warfare “know thy enemy?” They weren’t allowed off-world unless they were elevated to adult status, so we have a twenty-something year old Desi who is completely ignorant of all cultures outside of her own.

This is important because when she and Cai end up stranded together, she won’t believe him about anything. Her first time watching Hauk brothers fight was fantastic! She had to learn her people weren’t the badasses they thought they were.

Watching Desi and Cai fall in love was the best part of the book. That and the ending.

The rest of the book picks up from there and it is such a great ride. The ending was great…all except for The Darling Thing, as my friend has dubbed it. It will bother some readers a lot, and some not at all. I’m in the meh category. I’d like to read his book, and hear how Sherrilyn will change us around, so I’m all for it….Trust in Sherrilyn, readers, she won’t let us down.

Take it Off Tuesday…

Embraced by Blood by Laurie London