The Kraken King and the Greatest Adventure by Meljean Brook 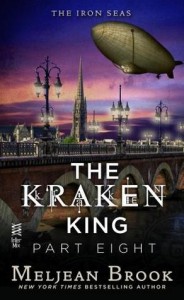 Arriving in Krakentown with their enemies in hot pursuit, Zenobia doesn’t know how they can even hope to win. Being terrified brings forth an undeniable truth: she loves Ariq and will do whatever it takes to stand by him.

But as their adversaries appear on the horizon, they realize that not all is lost. Drawing on the power of the terrible war machine, Ariq, Zenobia, and the entire town must put their lives on the line to protect what they love…

Original Review:
I burnt dinner trying to read and cook at the same time. :/

I held my breath almost through the entire story. OMG people, this was amazing. The build up to the ending is so intense, as is the entire book, but seriously, this was heart-pounding, breath-holding, edge of the seat intense.
Ariq is once more put in the position of handing over the Skybreaker. Or maybe he was never really given the option. His town is taken hostage, so to speak, and it leaves him little choice. Ariq has to show the Skybreaker. But he’ll have the advantage this time. With help from Archimedes and Yasmeen, and their allies, they make it to the Skybreaker.
This is the 8th and final installment of The Kraken King, and my reviews were short compared to normal, but I wanted my initial reactions down after I read each part.
You honestly won’t find a better-written serial than The Kraken King. It’s serial done right, where it reads as if each part is meant to be its own section, its own piece of the book, rather than feeling like someone took a full-length book and split it into pieces. I can’t recommend this serial enough, and all of you are lucky that it’s been released so there’s no waiting!
The romance was beautiful, the action was tense and plentiful, and the plot was intense. If you are wondering whether it’s worth the price, it is.

DemonLover gets a tattoo!