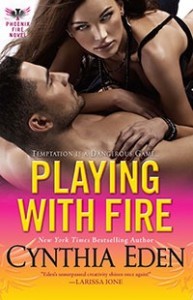 An Old Flame Cassie Armstrong has plenty to atone for. The daughter of the most immoral researcher ever to pick up a scalpel, she's determined to use her own brilliance in genetics to repair the damage her family has done to the paranormals. Especially Dante, the first of the phoenixes, the one they call the Immortal. He's been haunting her dreams since she was a little girl, and she's been trying to ease his pain for almost as long. If only he remembered any of it. . . Dante doesn't know what Cassie's story is. He almost doesn't care. The minute he sees her, all he can think is mine. But there's more to the pretty little doctor than meets the eye. And Dante isn't the only one to notice. He can't trust her, but he can't stay away--and if he wants to learn her secrets, he's going to have to fight like hell to keep them both alive. . .

Book 3 in Cynthia Eden’s Phoenix Fire trilogy picks up right where Once Bitten, Twice Burned left off. Cassie, sister of Dr. Wyatt, is trying to make it right. She just knows there’s a cure for the primal vampires her father created, she just needs to get phoenix tears. She is clinging to this desperate hope, feeling that if she can fix this, she can help reverse at least some of the damage, both literally and on the cosmic scale.
This is where Dante comes in. At the end of the last book, he healed her by crying (at least that’s what Cassie thinks since he was with her while she died).
She’s convinced that it means that he must care at least a little about her. Dante is the one they called The Immortal. He’s been in the facility since Cassie was a little girl. She tried to help him escape several times. Some attempts were successful, others, not so much. But Dante kept coming back for her, and kept getting recaptured so he could watch over this little girl who cared too much about the monsters.
He doesn’t remember this though, because they’ve killed him so many times, his memory is gone.
But he remembers her face. He’ll fight to keep her both alive and by his side, until he can remember more. What he’s not remembering, is something his body is telling him-she’s his mate.
While Wyatt may be dead, there’s still someone trying to pull some strings. And surprise surprise, he is Cassie’s ex. He’s paired with another doctor, one who isn’t what she seems either.
They want Dante back, but he also wants Cassie back. If she won’t come as his girlfriend, she can come back as an experiment. After all, she’s been one since she was a child. Her father made her immune to vampires, and her blood is poison, yet smells delicious. It’s quite the combination.
But her ex is an experiment too. He was military and volunteered to become. . .more. He wanted the super human strength of the paranormals. But he’s not finished. He thinks he’s created a serum that will turn him into a phoenix. And it does. For a while.
Dante and Cassie make their way back to her safe house, but it isn’t so safe. Their enemies are close behind, and Cassie is bleeding. She may heal quickly, but her blood sends out a siren song to every paranormal out there. Pretty soon they’re once more fighting for their life.
Cynthia Eden excels at paranormal romance, and this trilogy is no different. Her characters are always well developed, and her plots intricate. For a new taste of paranormal romance, check out her Phoenix shifters.
This series is only a trilogy, but it can’t be over, because I want Trace’s book! Lol (hear that, Cynthia? I need a story about Trace. And you know, Laurie is an awesome heroine name-just sayin’).