Ryder Duncan keeps his secrets. With a twisted scientist starving him in a 10 X 12 cell, it's not easy to conceal the abilities that set him apart from other vampires, or his plans for escape. But survival - and revenge - are worth waiting for. Until the so-called doctor tempts his appetites with something special: a woman, with a soft Southern accent and a scent like flowers. Sabine.

Sabine Acadia didn't volunteer to be dinner. She was kidnapped and tossed into the cage of a monster. A monster with fierce green eyes, a body that speaks of ruthless power--but a touch gentle as a caress. Ryder knows things about her, secrets Sabine needs to learn fast. Because while they might soon escape this prison, she's fighting an urge to set all her desires free...

In Cynthia Eden’s first Phoenix Fire book Burn For Me, there was a scene with a starved vampire who had been kept in the same government facility as Cain. Ryder was absolutely intriguing, so I was thrilled to get my hot little hands on his book.

At one point, Ryder is so starved that when they  toss a woman in and tell him she’s his, he can’t help himself. He has to have a taste. The only problem is that he can’t stop at “a taste.”  (they being the scientist Wyatt and his government lackeys–he wants to see if Ryder can resist, or if he’ll kill the woman-he’s a sick and twisted bastard)

Sabine was kidnapped and tossed into a cage with a starving vampire. She just wants to go home, but that’s no longer an option as she isn’t human. She doesn’t know that though, not until Ryder (accidentally) kills her.

As we know from the first book, when the phoenix rises, the beast is in control, and memory is spotty, or sometimes gone completely. Sabine is no different. She remembers the sexy vampire’s face, but that’s about it.

She keeps fixating on going home though, not realizing that she can never go back. Not just because maybe not everyone will accept her, but she will also bring danger to their doorstep.

But Wyatt told her to kill Cain, or he would kill her brother. So she has to try.

Of course it doesn’t go well. But Ryder not only can’t let her go, but he finds out that he doesn’t want to. He wants Sabine. And he knows she wants him, but she isn’t willing to give up her dream of staying home. Not until “home” kicks her in the teeth, that is.

Meanwhile, Sabine is scared of burning. She’s begging Ryder not to let her burn again, so instead of letting her die and come back again, he gives her his blood to heal her. And it does things to her. She’s not quite a phoenix anymore. But she’s not really a vampire either. It’s a really unique twist.

I feel like Cynthia Eden’s best stories are her paranormal ones, and this new trilogy really showcases her talents. With a new type of shifter in the world of PNR, this is a great book to pick up (although I’d read them in order). 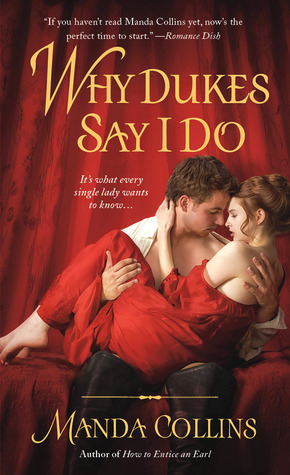 Review: Why Dukes Say I Do by Manda Collins