An Heiress for All Seasons by Sophie Jordan 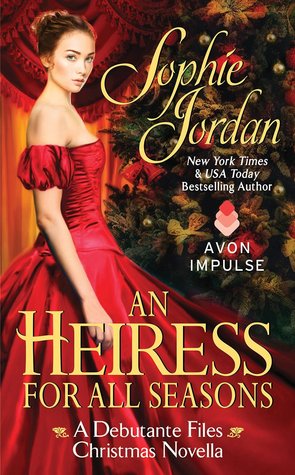 When a holiday blizzard brings together a pair of reluctant lovers, the result threatens their reputations … and may cost them their hearts.

Feisty and independent American heiress Violet Howard swears she'll never wed a crusty British aristocrat. Will, the Earl of Merlton, is determined to salvage his family's fortune without succumbing to a marriage of convenience.

But when a snowstorm leaves Violet and Will stranded and alone, their sudden chemistry will challenge good intentions. Seized by a desire that burns through the night, they'll toss reservations aside in favor of the heat found in each other's arms.

Will their passion survive the storm? Will they realize they've found a love to last them through all seasons?

I really liked the start of this story, but the heroine felt as if she started out one way, then became a nervous, naive, priss, then 5 seconds later she’s burning up with lust. I feel like I got whiplash from the back and forth with Violet.

The story starts out with Violet and her mother on their way to the Earl of Merlton’s castle for Christmas, and Violet is annoyed that her mom dragged her from her happy life in America to hunt for a husband in England. Especially since she feels that she’s only going to be paraded about to be found lacking, but since she has a huge dowry, she’ll end up with a proposal.

But Violet has a plan; she won’t encourage any men, they won’t propose, and she can go back home and marry the man she fancies herself in love with. That man is her father’s man of business, he’s never really encourage Violet who pushed him into kissing her and promising to wait for her. He doesn’t seem to care one way or the other.

Will knows he’ll need to marry an heiress since his father left him swimming in debt. He doesn’t show to the dinner his mother has arranged, though. He’s tired of seeing the same vapid, young misses being thrust in his direction so he can choose one to be his next countess.

But when Violet creeps into the stables late at night for some peace and quiet, she never expects to meet the earl. Will is instantly struck by the notion that Violet is it for him. And he tells her. This is where Violet started to grate on my nerves. And I feel that this is due to page length.

She tells him that she won’t marry him, but at the same time, her body is humming from his touch. He says he’ll win her over and this is where the story should really shine. And Will did. He was a fantastic hero. But Violet drove me nuts! She made a few emotional and stupid decisions, but hey, who hasn’t right?

But her problem wasn’t accepting Will’s suit, it was accepting that he loved her and wanted her, not her money. She never once thought that could or would be the case. And it pushed her into stupid decisions. Then very conveniently, her family is broke, money taken by her sweetheart back home, and she feels it would be misleading to Will to carry on with the engagement. So she leaves.

The loss of money is very convenient and never addressed as far as an actual real thing that happens. It is nothing more than a passing, Oh we have no money, boo hoo, I must run away. Then he chases her, happily ever after ensues, but still…that’s it? The whole plot rested on her having money, now it’s gone, and that’s it? What?!

I’ve read the next book in the series, and even then this isn’t addressed. This would have made a far better novel, than novella, or a longer novella. There’s so much that feels tied up due to page length, rather than it actually being wrapped up for plot reasons. So much more could have been done with this plot. OR if novella really is the goal, pull out the money issue. Maybe he says he’ll marry her and to hell with her dowry? That would have wrapped up much easier than this random we’re broke now thing.

That all being said, I liked the story, I’m liking the series, and I think that what saves this story is the author’s writing. She’s really very good. I only wish that this story hadn’t relied so heavily on Violet’s misunderstanding that Will only wanted her money up to the point where she’d only marry him if she had no money. I feel like the author is better than this.

Once Upon A Maiden Lane by Elizabeth Hoyt