Welcome guest author Bonnie Edwards!
She is a talented writer of Romance and Erotica, and even wrote one of my favorite books; Taste of Honey, and many more… 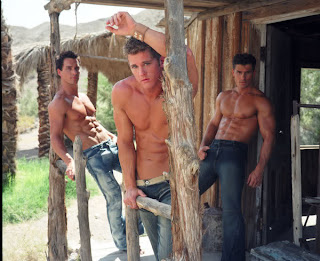 Quinn Brody stepped off the porch into the bright light of day. From the looks of things, a big bad day just got a whole lot worse.
She was here, looking like every boy’s dream. Damn it. She was supposed to be older, rounder, shorter, but this woman was all wrong. She climbed out of her old Bronco.
Too young, too tall, and lean with long shiny black hair that caught the wind. She gathered the lengths and tied it into a knot. He’d always liked black-haired women.
His brothers, Damien and Kal noticed, too. “Down boys,” he muttered for their ears only.

Their new housekeeper braced her feet wide. Low boots and Daisy Dukes made her legs look a mile long. A determined set to her mouth warned him of trouble, but being the eldest and most likely to spit trouble in the eye, he approached first.
When Damien and Kal backed him up, he knew their hackles had risen, too. The Brodys hated liars. And this woman had lied. How many more would she spin?
“You said you could cook. You’re too skinny to know your way around a kitchen.”
They’d advertised for a motherly type. What they had in the front yard was one hot mama.

“I cook. I clean. I do laundry.” She gave the ranch house behind him a good look. “I even do windows.”
Quinn stepped up close and took her hands in his. He flipped her palms up. The evidence was there; calluses and ragged fingernails. He dropped her hands and then turned to his brothers. “She’s a worker. No doubt.”

“Ma wouldn’t like her,” Kal said softly. “She told us a pretty woman would only bring trouble.”
At the left-handed compliment, the housekeeper grunted. “I won’t be any trouble.” The tone contained a plea. “And I’m flat out of gas, money and time. I need this job.” Her chin jutted as if the confession had cost her.
Damien scoffed. “Ma’s gone, rest her soul, and I’m too hungry to try another ad.” He scowled at Kal. “If you’d married Lisa last year like you should’ve, we’d be eating real food, not frozen shit.”
Quinn nodded. “Fine. We’ll give you a month to see if this is going to work. It’s quiet out here. No one visits for weeks at a time. You okay living this far out of town?”
Her ice blue gaze scanned the horizon. “The farther, the better.” She turned toward the back of the vehicle.

His brothers broke formation and ran to help get her gear. A couple boxes, a suitcase and a plastic tub with a broken lid. Inside, he saw a bright red set of kitchen appliances. A mixer, he thought. “You bake cakes?”
“Pies. I like to bake pies.”
“Welcome to Paradise Ranch.” Where the winds howl and so do the men. This woman was a whole lot of trouble on two legs, but pies? Bring ‘em on!…

YOUR TURN TO ADD TO THE STORY…COMMENT BELOW.
BEST COMMENTS WINS A SPECIAL PRIZE! AND DON’T FORGET TO LEAVE YOUR EMAIL AT THE END OF YOUR ADDITION TO THE STORY.