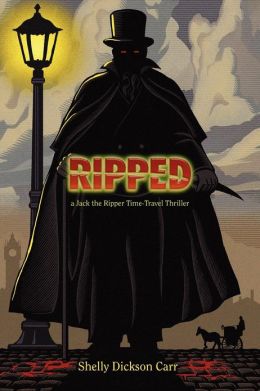 First, let me say that Carr comes from a pedigree of authors.  Her grandfather is John Dickson Carr!  And she’s a founding member of the Masterpiece Trust which allows me (and you guys as well) to get shows such as Sherlock!!!!!  I love Sherlock and it’s been picked up for series 4…SQUEAL!!!!!  Sorry had to get that out 😉
Ok, so in general I really liked this.  I mean what’s not to like about a “I want to know who Jack the Ripper is and must stop him by time travelling to do so” whodunit?  Although it’s not quite as simple as that.  Essentially this book is about choices and how the ones we make can affect everything.  History is changeable, for good or bad, and the ultimate theme of this book is: Be careful what you wish for because it might just come true.
Fifteen year old Katherine Lennox is living with her great-aunt Prudence in London after the death of her parents.  Originally from Boston, Katie’s feeling a little homesick, and it doesn’t help that her older sister is a rock star who’s never around.  She agrees to go see a Jack the Ripper exhibit at Madame Tussaud’s with her cousin Collin and his friend Toby.  The images and figures are bad enough, but the really disturbing one is the victim of Lady Beatrix Twyford.  She’s an ancestor to Katie and Collin and the Ripper’s last victim.  She also bears an uncanny resemblance to Katie’s sister Courtney.
While there Toby tells Katie the legend of the London Stone (if it ever leaves London the city will cease to exist – I’m not kidding – Google it) only in his version it also has the power to grant your heart’s desire.  Katie feels something around the stone and reaches through it’s protective barrier to touch it.  Next thing she knows she’s standing outside St. Swithin’s Church and staring at the Nineteenth century versions of her cousin Collin and Toby.  Then out from the Church comes Lady Beatrix herself.  What the…. ??????
Katie’s convinced she’s there to stop Jack the Ripper from killing her ancestor and all of the other girls, she persuades Toby and Collin into believing she’s clairvoyant and can tell them when these murders will happen.  They begrudgingly agree to help her but catching history’s most notorious unsolved serial killer is not going to be easy.  Especially when everyone is becoming a suspect.
I admit I’m a huge Jack the Ripper nut.  I’m completely fascinated with the entire thing so it took me a long time to stop freaking out over the addition of victims, timeline changes, etc.  Plus, I knew who the killer was as soon as the first murder happened.  It’s so dang obvious I spent the rest of the book wanting to slap everyone and say “HOW CAN YOU NOT FIGURE THIS OUT!”  It’s right in front of them the entire time!
That being said, don’t let my negatives detour you because it really is a good read.  Ask my friends, I’m horrible to watch mysteries with because I always figure it out quickly.  Not necessarily motive though, and I have to say that I hadn’t put it together in quite that way. I think that it’s a great read for a younger audience who’s sick of vampires, fallen angels, and the like.  Yes it has some supernatural elements, but that’s just time travel, everything else is completely realistic for the most part.  I think it’s an entertaining historical piece and a great way to introduce the Victorian era, especially around Jack the Ripper, the customs of the time and some famous characters – Oscar Wilde, Bram Stoker, Whistler – they all make an appearance.  I also liked how she used the Cockney slang (although at times I wish we were left to figure it out on our own) and how the chapters were titled.  It all added to the ambiance.
The author does a good job of bringing the era to life, of explaining the way she messes with history and the fact that it’s not necessarily a happy ending.  Katie doesn’t get everything she wants or set out to do.  In fact there is a lot of very hard decisions she has to make and they do lead to some very tragic consequences.
Despite a few minor things it kept me interested and toward the end I was racing to finish, in a good way.   It’s clever, and unpredictable in ways that do not follow the normal pattern.