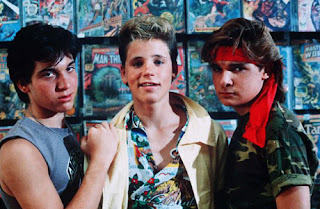 This year’s Comic-Con produced an amazing array of exhibits, shows and panels. To my own surprise and possibly others, it also delivered a shocker; a third movie in the LOST BOYS franchise. Yes, you heard me correctly; Corey Feldman and Jamison Newlander were present and should be held accountable. For what you might ask? Well, I’d like the 2 hours of my life back that I spent watching the “WORLD PREMIERE” of The Lost Boys III, The Thirst; which debuted Thursday July 23rd from 10pm-Midnight. 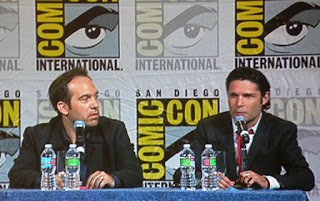 Corey and Jamison, two of main characters of the original Lost Boys trio, were talking up the movie and putting on quite a performance during the panel prior to the big unveiling. Corey arrived equipped with his digital video camera and recorded the audience, Jamison and himself during the panel. Though they both had heartfelt words to express for the missing third in the trio, Corey Haim, they tried to keep the mood light and seemed excited for this next chapter in the Lost Boys legacy.


Movie lovers and fans of the original cult classic Lost Boys braved the night in hopes of a new, edgier and better 3rd installment featuring the Frog brothers. What we got was a bag of popcorn, a glow stick, a red headband and a failed attempt at a vampire thriller. Each scene was predictable and almost cheesy in its dialogue and delivery. I was waiting for any moment to see Leslie Neilson to walk across the screen and confirm that this had all been a funny parody of the original. He never showed.


Although the film did not appeal to my liking, I must give great praise to the creator of the opening credits and introduction to the movie; the graphic art/comic book images were visually stunning. Another highlight was a song addition to the movie soundtrack by Corey Feldman’s band, Truth Moment. No matter what, I have to give the Frog brothers an “A” for effort and commend them on rising above the quality of Lost Boys II, The Tribe; Lost Boys III is definitely a move upward and in the right direction.

Look for the release of LB3 in the Fall 2010 from Warner Home Video.

Book Review: The Hunted of 2060 by Ami Blackwelder