Crossing the Line by Cynthia Eden 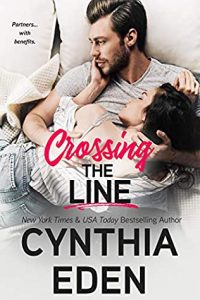 Linc Dalton knows that he is supposed to keep his hands off his partner…well, unless he is protecting Blair Kincaid’s gorgeous body. She’s his partner at the elite protection firm of Wilde Securities. Their job is to guard the wealthy, to take out the bad guys, and to generally kick butt. He trusts Blair completely. He admires her strength and courage. And he wants her desperately. Not that he ever intends to let her know that fun fact. Instead, he keeps up a fake persona where he offers her jokes and flippant comments.

Blair is straight-laced. By-the-book. Always by-the-book. Linc likes things a bit wilder. Control isn’t his strong suit, but, with a massive effort, he’s kept his control in place around Blair. With Blair, he’s on his best behavior…

And, suddenly, Linc has to put his hands on Blair’s delectable form. He has to stay very close to her. Has to whisper sweet promises to her. Has to share the same bed with Blair. It’s just a cover story. He’s not really in love with her…except, one night, they cross the line. Stop being pretend lovers and become the real thing. Once Linc has Blair, there is no turning back. Giving her up isn’t an option.

She broke the rules, and for once, Blair doesn’t care.

She shouldn’t have done it. Blair knows she shouldn’t have let the desire she feels for Linc sweep her away. Yet she did, and now, everything has changed. She wants him more than ever before, and, surely, they can do this, right? They can be lovers and partners and still get the job done. As long as emotions don’t get involved, everything is fine.

Until it isn’t. Until Blair and Linc are targeted as prey. Until all of their emotions are out of control.

When their cover is blown, Blair and Linc find themselves being hunted. It’s a race for survival, and Blair knows that Linc has her back. Just as she has his. Prepare yourself…things are about to get wild.

The stakes are higher than they’ve ever been, and Linc and Blair are about to turn things red-hot. Molten level. Watch out…you just might get burned.

Author’s Note: These partners have been on a slow-burn path, but their desire is about to ignite into an inferno they can’t control. You ready to steam up the pages? We’ve got action, thrills, romance…and a hero who is funny, sexy, and willing to do anything to claim his lady. CROSSING THE LINE is a complete, stand-alone novel. Guaranteed happily-ever-after (though reaching that ending will sure be fun…and a wee bit dangerous). Enjoy!

I really love this series. In this book, we have the friends to lovers trope, and I like that they’re truly best friends. Linc’s been in love with Blair from the moment he met her, but he also values her friendship and won’t do anything to jeopardize that. They’ve been partners for a few years now, and she’s the most important thing to him.

A few books ago, we saw Linc go off on his own cowboy-style and Blair didn’t take it well. They stayed partners, but it’s been hanging between them. In this book, they’ve been called in to an undercover case. They’re posing as newlyweds at a private tropical island resort because two women have been kidnapped from that resort and ransomed back. The idea is that they pose as ridiculously rich and incredibly in love newlyweds hoping to make Blair a target. The owner of the island doesn’t want authorities brought in, and knows Erik Wilde well enough to ask this favor of him.

So Erik sends in Blair and Linc, with Cole working backup.

Blair has secrets in her past, and she’s worried that they might turn Linc away from her. She doesn’t want him to ever stop being her friend and she’s worried her past is going to be a problem. It’s best to keep him as her partner and best friend, rather than try anything else. Even if she dreams of more at night.

From the moment they enter their roles, Linc realizes playing the devoted new husband will be no hardship, but at what point does he stop pretending? Once he and Blair cross the line from friendship into relationship, will they continue on once the case is over? And the case isn’t going to be as open and shut as they had hoped. While it looks like the kidnappers definitely see Blair as a target, what Wilde doesn’t know is that Blair’s past is going to catch up to not just her, but all of them. This story didn’t go where I thought it would, and I loved Linc and Blair.

I love LOVED how they both tried to play the “I don’t want to hurt you so I’ll leave you card,” but they realized that they work better together than alone. I really love when a hero and heroine can become a strong team and work together. This book definitely rocked that! Linc was great. He was a fun and funny hero and I’d like to see more like him! I love the growly alpha possessive hero, and he definitely was. But he’s also adorable. This series is shaping up to be my favorite of Ms. Eden’s Romantic Suspenses, and I love how each story has such different heroes, yet they all can maintain that growly “mine” type of hero. With her intense plots and intriguing characters, each book has been a 5 star read for me.

How To Write A Romance by the Avon Editors