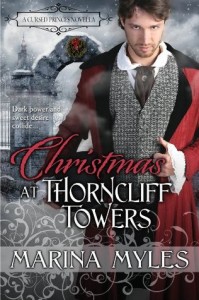 Thorncliff Towers is done up for Christmas, secure against wind and wolves. But Karina Petri is shut out, too, and the gypsy witch wants what’s inside. She envies the gifts, the feast, the pretty clothes, of course. But her true desire is for the love of Constantin Stoica. Her smolderingly handsome childhood friend agreed to serve Lord Draven after his brother was caught stealing last year. He suspects Karina was involved—and it would take more magic than she possesses to make him forgive…

Constantin has always been drawn to Karina’s dark curls, flashing eyes, and reckless ways. But trusting her has proven dangerous before, and this night holds more to fear than most. The wrong decisions could cost him his job, his safety—even his life. But letting Karina go could cost him his heart…

Nope! It’s only 60 pages or so, so I was kind of excited to read this one before bed the other night. I’ve been in a PNR mood and this looks perfect for me.

But then I started it. It’s bad. Like really bad. Like I’m surprised this is a Kensington book bad. I wasn’t sure I was going to finish it once I saw how amateurish the writing was, but the heroine is going to take away the hero’s will so she can make him do what she wants. I’m out. That’s not a trait I want in a heroine.

Quote that made me dnf:

“She was the last person Constantin wanted to see. And considering the promise he’d made to Lord Winthrop to stay at Thorncliff Towers indefinitely, coming back to camp was the last thing he was supposed to do.

That’s why she must go to Thorncliff Towers armed with the magic elixir. If she could get Constantin to drink it, it would allow her to command him without his knowledge. He would have no idea she was directing his actions—directing him to come and say good-bye to his grandfather on hisdeathbed, when he wouldn’t have the opportunity otherwise.“

I get the author is trying to justify her actions here with the “oh he needs to say goodbye to his grandfather” here, but that doesn’t work for me. You don’t take away a person’s free will unless you’re the villain of the piece. It goes on to say,

“Of course, Karina thought as she ground some more, I’m going to Thorncliff Towers with a more selfish reason in mind. Maybe I can get Constantin to fall in love with me.”

Let that sink in. While he’s under a potion she knowingly gives him to take away his will, she wants him to fall in love with her.

***ARC courtesy of eKensington and KLovers