On the night of the Parkhurst ball, someone had a scandalous tryst in the library. Was it Lord Canby, with the maid, on the divan? Or Miss Fairchild, with a rake, against the wall? Perhaps the butler did it.

All Charlotte Highwood knows is this: it wasn’t her. But rumors to the contrary are buzzing. Unless she can discover the lovers’ true identity, she’ll be forced to marry Piers Brandon, Lord Granville—the coldest, most arrogantly handsome gentleman she’s ever had the misfortune to embrace. When it comes to emotion, the man hasn’t got a clue.

But as they set about finding the mystery lovers, Piers reveals a few secrets of his own. The oh-so-proper marquess can pick locks, land punches, tease with sly wit . . . and melt a woman’s knees with a single kiss. The only thing he guards more fiercely than Charlotte’s safety is the truth about his dark past.

Their passion is intense. The danger is real. Soon Charlotte’s feeling torn. Will she risk all to prove her innocence? Or surrender it to a man who’s sworn to never love?

This book sends us back to Spindle Cove, er sort of. It doesn’t actually take place in Spindle Cove, but we do see some familiar faces, and the heroine, of course, Charlotte Highwood. The quick and dirty of it is that Charlotte saw Lord Granville (from Say Yes to the Marquess) go into their hosts’ library and she took the chance to warn him away from her.

You read that correctly. She was warning him away. If you know the Spindle Cove series, then you know that her mother is quite possibly the most embarrassing matchmaking mama there is, and she has her eyes set on Lord Granville. So Charlotte finds him alone in the library and lets him know that she isn’t interested. It’s quite possibly the cutest introduction ever. She basically has a total foot-in-mouth conversation, where she calls him old, a black sheep, a third son. *cringe*

But Piers takes it in stride.

Next thing they know, voices are in the doorway and Piers has somehow pulled them into a window seat and drawn the curtains. They’re totally hidden…except the people in the doorway start to fool around. yeah. And after they leave, Charlotte and Piers step out from the window only to find they have an audience. She’s been ruined. Piers fixes everything by stating that they’re engaged, but Charlotte is less than happy. She spends the rest of her time trying to find who the amorous couple really was. Piers meanwhile is absolutely set on marrying Charlotte. She just doesn’t know it yet.

It’s fun, and cute, and sexy, and I swear this is Tessa Dare at her best. I need more words to describe this book, because seriously we’re looking at my favorite for the year. This is flirty, witty, sweet, and the sexual attraction between Piers and Charlotte is enough to make my ereader sweat.

The best part about this book? You can read it out of order! You don’t have to have read all of Spindle Cove, or Castles Ever After, although why you wouldn’t want to is beyond me. They’re all great! 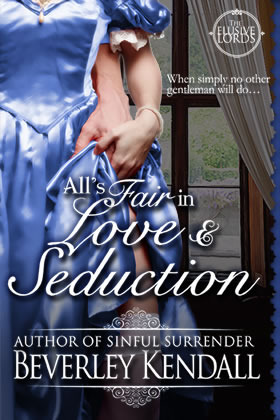 Review: All’s Fair in Love and Seduction by Beverley Kendall