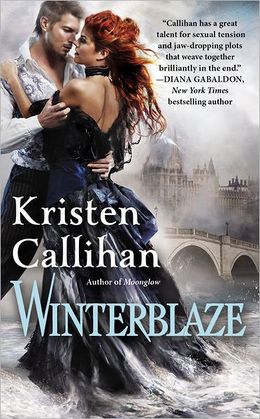 Definitely 4.5 out of 5 flames!
This third installment in Callahan’s Darkest London series finds us delving into the story of Poppy Ann Ellis Lane, the eldest sister of Miranda and Daisy, and her husband Winston Lane.
Poppy’s life isn’t going so hot at the moment, not just because she can conjure ice, because she’s been estranged from her husband of fourteen years for months.  Not surprisingly he was little upset about being attacked by a werewolf and finding out his wife is part of a secret supernatural society he never knew about.  Now, to complicate matters, a primus demon with a grudge is after Winston and Poppy has to go and play bodyguard for her husband.  Then things take an even worse turn when they learn that not only has Winston – unbeknownst to himself – promised his soul to the demon but that of their unborn child.  Some days it just doesn’t pay to be gifted.
****WARNING SLIGHT SPOILERS AHEAD****
I like this series and I’m glad to see it’s not ending with this last sister.  I have to say Poppy and Winston were my favorites, so far.  I’m glad it doesn’t go the traditional route and that Winston becomes a werewolf so now they’re “equals.”  I like that he remains human and still has to cope with all of this.  I did not like the fact that Poppy kept being beaten, thrown about, and constantly putting herself in bad situations and yet the baby is fine.   I’m sorry, but if someone/thing hits you hard enough to knock you down or throw you a few feet….um….yeah.
I also did not like the spider demons but that’s a personal thing because I HATE SPIDERS!
And there are so many loose ends to tie up:  Where is Lena?  Will we ever meet their brother?  Will Poppy continue on as Mother after she becomes a mother?  And I have a feeling that we haven’t seen the last of their real father.   Hell hath no fury like a demon scorned.
****SPOILERS ARE FINISHED****
Let’s talk the most important stuff.  The sexual chemistry between Poppy and Winston.  I’m fanning myself now just thinking about it.  And this is one of those rare instances when the tension and build up is so much better than the payoff.  I mean the actual sex scenes were hot, but the tension and teasing scenes were scorching!  These two have chemistry in spades!
This book just has it all: historical London setting, supernatural elements, hot chemistry, creepy crawlies, mystery, secrets, revelations…just an out and out jolly good time.
*Thanks to Hachette/Grand Central Publishing and NetGalley for the eGalley