In Gilded Age New York City, the bachelors of the Knickerbocker Club spend their days rubbing elbows with Manhattan's most elite citizens—and their nights with its most intoxicating women...

Sometimes the journey is more pleasurable than the destination...

Standing on the platform at Grand Central Station, Ted Harper is surprised by a fiery kiss from an undeniably gorgeous damsel in distress. He's certain she's a swindler who's only after his money, but he's never met a woman so passionate and sure of herself. Disarmed, he invites her to spend the journey to St. Louis in his private car—perhaps against his better judgment.

Clara Dawson has long known how to take care of herself, but the savvy shop girl is at a loss when she witnesses—and becomes entangled in—a terrible crime. Desperation propels her into a stranger's arms at the train station, but she hadn't expected Ted to offer her the protection she so badly needs—nor did she expect their chemistry to develop more steam than the engine of the train. He's everything she never thought she could have, and she's everything he didn't know he wanted. But as her secrets begin to unfurl, their fledgling romance could be in danger of derailing before they arrive at the next station.

I read this based on Sarah MacLean’s recommendation. I really liked it!

Ted is standing on the platform waiting for his train to arrive when a delicious bundle of warm and vibrant woman latches on to his side and mentions how she hopes she packed well enough to see his mother. He’s shocked into silence and while she chatters away, he is just floored. When this random woman kisses him, he notices her eyes darting around and realizes she’s afraid and his protective instincts rear their head.

Clara is in trouble. She has just witnessed something that put her life in danger and she can’t escape. Seeing a man standing near the trains, she knows she needs to escape and getting on that train might help. Pretending to be his wife, Clara figures she can charm her way on the train and she’ll disembark, no harm no foul. She doesn’t count on Ted wanted to help her beyond the train ride.

For a novella, I felt this story really packed a lot in. The train ride is only a couple of days, and her plan is to stop in St. Louis and meet up with her family while she hopes no one followed her from New York. However, she’s not only been followed, but she’s been made. The guy following her sees her and despite the outfit change and fiance, he recognizes her.

The problem is that Ted doesn’t believe her, not completely. He thinks she’s either scamming him or crazy. Ted is one of the richest men in New York and everyone knows his name. But Clara only knows him as Ted. Is she scamming him? She wouldn’t be the first. When he finally starts to believe her and even fall for her, he ruins it. I love how Clara handled that, and the way he tried to fix it. I also like that she made him work for it a bit.

I do wish the ending had been a teensy bit longer. It felt quick, but maybe it’s because I just wanted more. 😉 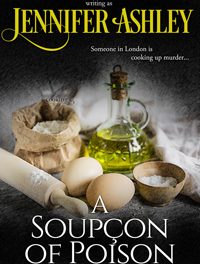 The Trouble With Mistletoe by Jill Shalvis