Three Weddings and a Murder by Tessa Dare

Today’s Tessa Dare book isn’t actually a Spindle Cove story. I’m saving my review for A Lady by Midnight for last. But this is my favorite Tessa Dare story of them all. I can’t tell you how much emotion she pulled out of me just in this novella. And the best part? It’s all for a good cause.

“Here’s where we’re at, fundraising wise: between direct donations and sales of THREE WEDDINGS AND A MURDER, we’ve raised about $6K. BUT… our team goal is to raise $10K! We really want to reach it! Anthology sales are ongoing, but the team donation deadline is 8/27–soon. So if you’ve been considering making a direct donation to Team Bodice Rippers,[here] this is the last week! “ 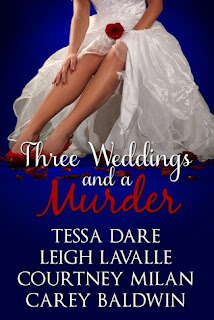 Three Weddings and a Murder is an anthology featuring 3 historical romance novellas for the “weddings,” and a contemporary romantic suspense novella by Carey Baldwin for the “murder” which I did not read. (I don’t read contemps very often, and I don’t think it would be fair to review it) That being said, this review is only for:

What struck me the most about this story was the emotion. I think I went through every single emotion possible. This story takes place over several years. That’s right, years. Eliza did something rash as a 14 year old, and consequently was ruined. Her parents forbid her to have a Season until each of her sisters was married, so she wouldn’t have a chance to ruin their prospects.

When she meets Mr. Wright for the first time, she immediately discovers he is Mr. All-Wrong. But for some reason they can’t leave each other alone. What is so sad about this one, is that once they realize they are in love, it isn’t possible for them to be together. The ending made me cry.

I think this is without a doubt Tessa Dare’s best work yet. I am so sad because I’ve read all of her books. But what makes that so wonderful, is that now I can re-read them!

And in this story, it all begins with a pair of boots.

Cat is walking out the door to go riding when she spots a pair of boots resting on an ottoman. Surprise, surprise, her missing husband is not missing anymore. He’s home, and he didn’t even bother to let her know. He figured she’d happen upon him at one point or another.

This story is a bittersweet tale of love, anger, and redemption. Watching them try to hurt each other with their verbal barbs, and angry words is nothing compared to the forgiveness they look for. How can he forgive her transgression? How can she forgive his purposeful absence? It was a lovely story, and I am very glad I have her novel The Runaway Countess .

Ginny and Simon were childhood sweethearts, but Ginny was poor. Not just the scrimping and frugal poor, but the her father would sell his only daughter for money poor. So when Simon’s parents made no bones about cutting him off should he marry her, Ginny knew that Simon would marry her anyway. And she wouldn’t allow him to live in the horror and misery she’d known. So she married another man.

It infuriated Simon, so when he was one of the wealthiest railroad industrialists of his time, he found the perfect revenge. Ginny was widowed, and he was rich. . .for now. He was in the midst of the deal of a lifetime. A make-or-break you kind of deal. And he knew he was going to be broke (bad pun-ha ha). He would lose all his money, but in the meantime, he would find, seduce, and wed Ginny. She wouldn’t know they were poor until it was too late.

This isn’t exactly a revenge plot though, because he thinks that he can deal with her being angry with him, but he’ll at least have her-he can make her love him. Except, he finds out, that he can’t. But Ginny out-plots his plotting, and as the title states, The Lady Always Wins.