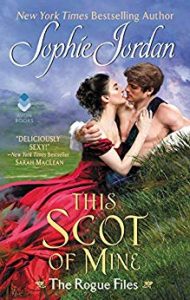 Desperate to escape her vile fiancé, Lady Clara devises a bold lie—that she’s pregnant with another man’s child. With her reputation in tatters, Clara flees to Scotland to live out her days in disgrace, resigned to her fate as a spinster…until she claps eyes on the powerful and wickedly handsome Laird Hunt MacLarin.

She’s the answer to his curse…

Laird of an ancient clan, Hunt needs an heir, but he comes from a long line of men cursed to die before the birth of their firstborn. When the Duke of Autenberry approaches him with a proposition—marry my ruined sister—it seems the perfect solution. Even better, the defiant lass stirs him to his very soul.

No escaping the truth...

Except marriage cannot set them free. No matter how much Hunt desires her. No matter how much Clara burns for him. Soon she is falling for her husband, but is love enough to end the curse? Or is the tragic history of the MacLarin Clan doomed to repeat itself?

This book should have been better. There is absolutely no reason it should have been boring. Sophie Jordan writes great Historicals, the plot sounds fantastic-He believes he’s cursed, she couldn’t get out of an engagement with an abusive pig, so she faked a pregnancy that isn’t her fiance’s, and they get together. Why isn’t this better?

By the halfway mark, not much is happening. I’m mad at her brother for allowing all this to happen on her first day there. She hasn’t even been there a few hours and he’s like “Oh you can stay forever, we love you, but by the way, MacLarin offered to marry you and I think you should do it.”

About halfway through it picks up, but then Hunt is awful to Clara. Truly awful. And then months pass and no apology, no explanation, no conversation, nothing. But they’re sleeping together. I felt like we were missing a few chapters. It was like…wait, they’re okay now? What’s going on? I actually flipped back to make sure I hadn’t accidentally skipped something.

The “curse” was real which kind of irritated me. I didn’t want Hunt to be right. I think it was meant to be funny, but it really just comes off as frustrating. Also his Nana was terrible. Clara was just treated awfully by everyone. Did no one else care that the laird got married and his wife was pregnant? Anyone? At least anyone who wasn’t irrationally angry at Clara?

This book didn’t work for me. If you’ve read it, let me know down in the comments if you had the same issues I did, or the opposite!

***ARC courtesy of the publisher via edelweiss

The Visitor by Amanda Stevens

How to Claim an Undead Soul by Hailey Edwards