The Unleashing by Shelly Laurenston 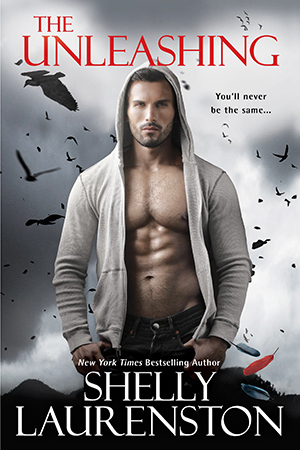 Kera Watson never expected to face death behind a Los Angeles coffee shop. Not after surviving two tours lugging an M16 around the Middle East. If it wasn’t for her hot Viking customer showing up too late to help, nobody would even see her die.

In uncountable years of service to the Allfather Odin, Ludvig “Vig” Rundstöm has never seen anyone kick ass with quite as much style as Kera. He knows one way to save her life—but she might not like it. Signing up with the Crows will get Kera a new set of battle buddies: cackling, gossiping, squabbling, party-hearty women. With wings. So not the Marines.

But Vig can’t give up on someone as special as Kera. With a storm of oh-crap magic speeding straight for L.A., survival will depend on combining their strengths: Kera’s discipline, Vig’s loyalty… and the Crows’ sheer love of battle. Boy, are they in trouble.

You know two things when  you open a Shelly Laurenston book 1) it will always be full of fun and a bit of insanity, and 2) you’ll get a big kick out of the characters. The Unleashing absolutely fulfills both of those.

I wasn’t sure what to expect with her new series, but I was surprised how often I actually laughed out loud. Like to the point where my husband is sleeping next to me and I’m trying to desperately hide my laughter.

Kera Watson is a former Marine who works at a coffee shop. She’s killed and brought back as a Crow-a supernatural group of women who fight for Skuld, a goddess who gives them this second life. They are called in to kill when needed. And they are needed a lot, lately. There are several other clans (9 total I believe), and they all have a patron god or goddess, and a specialty. But the end goal is to keep the balance in our world, and to eventually fight with Odin at Ragnarok. It gets a little world-buildy (I know it’s not a word lol), but it’s so fun, you don’t mind.

Kera is completely unsure of this new life she’s been given, and of herself. That’s not acceptable to her. She’s a Marine, she is always in control. But the place, this clan, it’s like being in a sorority. Or an insane asylum. The only thing that’s familiar? Vig, a neighboring Raven, and a regular at her coffee shop.

The two of them waste no time in getting reacquainted. But unfortunately, her new life doesn’t let Kera rest for long. She and her new sisters are called upon to retrieve something for a goddess. The Crow’s motto may not actually be sink or swim, but it should be since they literally push her off a building to teach her to fly (yep, she’s got wings. How cool is that?)

But Kera finds her place in her new world, and she finds much to her peace of mind, that she isn’t going to turn into an indiscriminate killing machine. There really isn’t another series out there like this one, and I really think Paranormal Romance is going to make a comeback this coming year, so if you haven’t read this one yet, I’d say start here. Remember when those “Band of Brothers” type PNR were all the rage? This turns it on its head-we have the women as the main focus and if you’ve read Shelly Laurenston, you know that they’ll be fun!  You’ll never call her books boring.

With her trademark sass and wit, fun and insane characters, and action galore, you really don’t want to miss out on this new series. Vikings, Valkyries, and so many more make The Unleashing new and refreshing.

***ARC courtesy of Kensington via netgalley

Playing With Fire by Cynthia Eden