The Importance of Being Wicked by Victoria Alexander 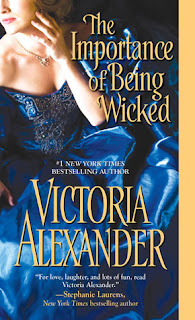 3.5 flames
“It could be worse.”
Winfield Elliott, Viscount Stillwell, has just had his heart ripped out-and it’s not from another failed engagement (he’s had 3!). It’s because his home, the family’s home, has caught fire. And it’s devastating. It hits Win hard, but he keeps up his mantra of “It could be worse.”
Miranda Garrett is a lady. But she’s also an architect. One of the best out there, in fact. But she’s been hiding behind her late husband’s name and business for far too long, and when she has the opportunity to rebuild Fairfield she has to go in person. Her normal male liaison can’t leave London, and so many men won’t work with a woman, so she’s risking more than just her reputation and a job she loves. She’s risking her employees’ livelihood. With every intention of stepping carefully and tactfully, Miranda meets Win.
Win, the legendary charmer, can’t seem to charm his new architect’s liaison. She doesn’t find him witty, she doesn’t laugh at his jokes, and she keeps him off-kilter. And this irritates him. The two of them are off to a fun start full of witty banter and snappy comebacks.
Their romance was fun, and sweet and everything I’ve come to expect from Victoria Alexander.  Towards the end, Miranda’s determination to keep her architecture secret from Win is what causes a rift between them. This is the only part that I felt was a bit too drawn out. Win had known for a while and was holding out for Miranda to trust him. Miranda knew how Win felt about ladies staying in their place (and out of the workplace-ouch), but it was based off an asinine comment he’d made the first or second time they’d met. While I can see why she wouldn’t tell him, I also think he more than proved his change of heart.
Now, that being said, this was absolutely a fun romance and a delightful couple of characters. I recommend this to anyone who enjoys Historical Romance and sassy heroines.