The Governess Game by Tessa Dare 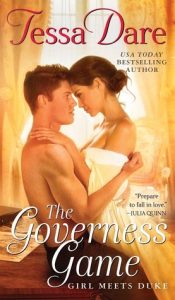 He’s been a bad, bad rake—and it takes a governess to teach him a lesson

After her livelihood slips through her fingers, Alexandra Mountbatten takes on an impossible post: transforming a pair of wild orphans into proper young ladies. However, the girls don’t need discipline. They need a loving home. Try telling that to their guardian, Chase Reynaud: duke’s heir in the streets and devil in the sheets. The ladies of London have tried—and failed—to make him settle down. Somehow, Alexandra must reach his heart... without risking her own.

Like any self-respecting libertine, Chase lives by one rule: no attachments. When a stubborn little governess tries to reform him, he decides to give her an education—in pleasure. That should prove he can’t be tamed. But Alexandra is more than he bargained for: clever, perceptive, passionate. She refuses to see him as a lost cause. Soon the walls around Chase’s heart are crumbling... and he’s in danger of falling, hard.

My first thoughts when I saw this book release were, “Yes! I’m in need of a Tessa Dare book.”

Alexandra Mountbatten is a clock-setter, but when she knocks on the door she usually uses, she is mistaken for a governess by the new duke. This scene is hilarious, by the way. He has taken over the room to make his Man Cave, if you will. She thinks he’s a libertine and a rake, and wants none of his nonsense. He offers her an insane amount of money to be governess to his two new wards.

After she storms out in righteous indignation, she loses her chronometer, her livelihood, and has no choice but to accept the duke’s offer of governessing (yes I made up a word lol) the girls.

This book is charming.

This duke was a new type of hero for me, I don’t think I’ve ever read one quite like him. Oh he was very rakish, and charming, and sexy, don’t worry. He really is the typical duke, except…he isn’t. He refuses to have children. Chase has gone through something to make him never want children, so his solution is unusual and I don’t know, it was kind of refreshing to read something like this.

The girls were a handful. They’d chased off every governess and many servants. Chase was a new duke, and Rosamund and Daisy came with the title. He didn’t even know who their parents were, although he assumed they may have been the old duke’s by-blows. The girls captured Alexandra’s heart before she knew it, even though they were awful to her. But she recognized they were hurting, and instead of Mary Poppins, she became Captain Alexandra, and they became her pirate crew. Alexandra didn’t know much about children, but she’d been raised on ships, and she knew how to catch the girls’ attention. I mean, you can’t be a pirate without knowing how to count your gold, or plot your course, so their pirate game was actually lessons in disguise!

Chase was wallowing so hard in his “wah wah I shouldn’t have been duke, my cousin should have been” that he never saw what was right before his eyes: everything. The girls, Alexandra, even Millicent.

Of course, Millicent. What can be said about Millicent? She is a doll and Daisy “kills” her every day. The daily funerals for this doll are the stuff legends are made of. But more than that, they were the moment where the whole group was a family, if only for the few minutes where Chase said the eulogy.

But how can Alexandra, half-Filipino and half-American, daughter of a sea captain, ever make Chase, heir to a dukedom, look for more than a night with her?

This book was fun and flirty and all the things I’ve come to expect with a Tessa Dare book. 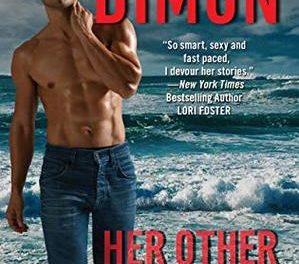 Her other secret by helenkay dimon