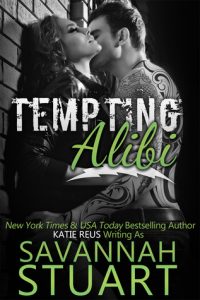 Former Marine Scott O’Callaghan got into a fair amount of trouble as a teenager, but now he’s grown and runs a respectable auto body shop. After eight years in the military, he’s left his troublemaking past behind him. Unfortunately for him, the sheriff of his town has it out for him no matter how much he’s cleaned up his act.

When he’s accused of a crime he didn’t commit, no one is more surprised than him when straight laced Michaela Miller provides him with an alibi. An alibi that’s a complete lie. Determined to find out why his sexy next door neighbor helped him out, he puts himself in danger of losing something he’d never considered. His heart.

This is one of Ms. Reus’ Savannah Stuart books which usually means steamier and sexier. This is definitely true of this novella.

Scott is Michaela’s new neighbor, and for months, the two of them ogle each other, but don’t do more than wave at each other. Until one day when Michaela brings her car into Scott’s shop. Right as he’s talking to her (Finally!), the sheriff walks in. Accusing Scott of vandalizing his nephew’s auto shop, Michaela pipes up with the fact that he was with her last night. The only problem? He wasn’t.

When he brings her flowers and a bottle of wine as a thank you, the two of them end up hot and heavy on her porch swing. I loved the way they were together, I loved how their relationship flowed so well, and they were cute together. I also enjoy this author’s writing style a lot, so for the most part, I really liked this book.

But I didn’t like how certain things were left. The sheriff seems like a good man, just loyal to his family. He seems to be leaning toward realizing his nephew is a drunk idiot, but it isn’t really wrapped up. Scott’s dad died and it felt, odd. Really random. Maybe necessary to show Michaela and Scott getting closer?  I don’t know.

I honestly liked the story, and the characters. Michaela has brothers, and Scott has friends, so I hope more romance happens in their small town. I’ll absolutely read it. I just hope that they are wrapped up a bit more.

The best news is that it’s currently free!

Fear For Me by Cynthia Eden