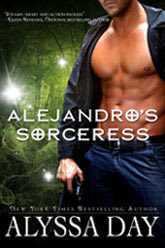 I’ve been waiting soo impatiently for Alejandro’s Sorceress to come out, and then the woman had to go and post this! argh, she’s such a tease!

You can thank me now. I write about murderous leprechauns so you don’t have to:

It was the laugh that put Alejandro over the edge. Cool, clear-headed, Paranormal Operations training flew out the window. Hot, primal rage from years of battling murderous vampires in San Bartolo took over. He triangulated his shots in his head a split-second before he took them.

A couple of heartbeats later, three werewolves lay dead on the ground.

“Glad you talked me into that silver shot,” he said mildly, as if his partner hadn’t almost died and wasn’t in danger of becoming a shifter himself.

Mac forced out a laugh and hauled himself up off the ground.

“Damn wolves. I was so focused on the possibility of big, bad, and ugly that I missed the pitter-patter of little feet.”

“Leprechauns. Bastards tripped me up, and the wolves jumped me when I was down.”

Alejandro’s Sorceress is an ebook exclusive about Alejandro and Maria from Atlantis Unleashed.