The review below was first published to Book Savvy Babe blog on April 21, 2011*

In an alternate Atlanta where vampires and werewolves prowl the night, magic is real, and tattoo magic is the strongest magic of them all, a serial killer is targeting the magically tattooed on the full moon.

Dakota Frost, best magical tattooist in the Southeast, learns from the police she may be a target … just when she receives a lucrative commission to ink a magic tattoo for a werewolf before the next full moon.

Caught between the rough and tumble world of the werewolves, the law and order rules of the vampires, and a sexy man-in-black whose motives are in doubt, Dakota must tread carefully to survive – because she doesn’t know whether her werewolf client is the tattoo killer … or the next victim.

I was very pleasantly surprised by Frost Moon.  This urban fantasy book was so different from your average supernatural story, the characters unique.  The main character in Frost Moon is Dakota Frost, a magical tattoo artist with a Mohawk she calls a “Deathhawk”.  The story begins with Dakota being drawn into a murder investigation involving magic, tattoos, and possibly a werewolf.  While digging up information on the murders, and investigating the background of magical tattoos she’s scheduled to ink, Dakota becomes entangled in the dangerous supernatural underground.
I was on the fence as to how much I liked Dakota’s character for a good portion of the book.  I loved the tattoos, and they sound beautiful and creative, and really become part of the character.  However, there were a few aspects of Dakota that I wan’t too sure about.  Dakota, unsurprisingly, is a strong liberal, earth friendly gal.  The liberal wasn’t very surprising, but the earth-lover in her seemed a bit off.  She drives a vespa, loves the Prius, and even mentions global warming and sustainable coffee beans.  Also, I was a bit confused at times as to Dakota’s sexual persuasion, although it was cleared up later in the book (kinda).  There were so many facets to the character, I really had to process them all.  It seemed to me that some of these facets would work against each other. But, I guess is works for Dakota, and gives her character depth.
The characters in Frost Moon really made the book stand out.  The characters all have different backgrounds and are associated with various supernatural entities.  There are werewolves, Men-in-Black, various were creatures, vampires, magicians, even a beast lord.  I love Cinnamon, a  young were tiger.  She is spunky, funny, and really good for Dakota.  This book is urban fantasy/science fiction, and as is NOT a romance, which really worked for this book.
Frost Moon is a creative and intelligent urban fantasy adventure, where magic, vampires, werewolves, and shifters collide in a suspenseful supernatural tale.  After reading Frost Moon, I am looking forward to reading the next installment of the Skindancer series, and I am seriously craving another tattoo! 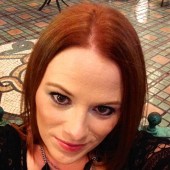