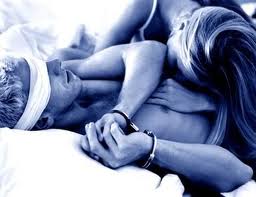 and wait till you see what Jessa has for us…
He’d found the blue velvet bag at the bottom of his gym tote, half hidden under his extra t-shirt and change of socks. Amid the white cotton, the blue velvet was like a low, throaty laugh, a tease. The length of white linen that bound the mysterious bag closed also tied a note card of thick, creamy cardstock. The scrawled handwriting was bold, forward:

Wait for me in the towel room after close. Wear these.

What he’d found inside… The whisper of linen and the clink of steel¾the curves of hard metal as sensual in their way as the soft fabric¾had made his skin jump and shiver. Who knew this about him? How had he given himself away?

He’d pumped hard at the weights, surreptitiously studying the others in the room. Every eye that roamed the flex of his muscles, that lingered on his body while he stretched, felt like a slow finger drawn through the slick film of his sweat. He pumped until his bones creaked, but the promise in the blue velvet was an ache that penetrated deeper still.

Did he dare follow the uncompromising command in those lines? How could he when he didn’t know who would come to him?
But obviously, someone knew him.

While the gym closed, all the fluorescents flickering out, he lingered in the shower. His soapy hand over his chest made his nipples pucker, and lower… No, he wasn’t allowed to do that pumping himself.

He jammed his palm against the cold water handle and thrust his head back under the spray so that every part of him hardened against the insistence twinge of desire. Damned if he knew who was summoning him, but he wouldn’t go all meek and mild.

Not until he had proof of this would-be lover’s strength of command. Then, then they’d see…

It’s your turn to join the story…
Comment below & continue the scene.
This will run through the weekend and the best entry will receive a signed copy of Jessa Slade’s book:
Vowed in Shadows

You can comment as many times as you like…keep it going.

A First Look at A Promise Broken by Anissa Garcia!