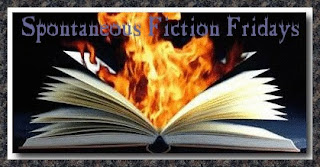 Today’s story starter comes from Juliana Stone, and this sexy motorcycle hottie was her inspiration. And what an inspiration, wow! I’ll take one of him! You all know the rules, stare at gorgeous hunk of inspiration for a moment, read her story, and add on. 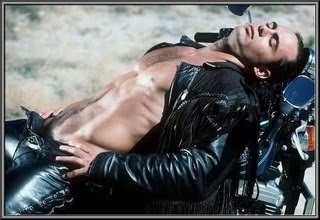 The roar of Jake Rogan’s black and chrome Fat Boy, echoed eerily into the night, as the last dying rays of sunlight flickered across the horizon. He let the throttle rip, enjoying the power of his Harley, as the heavy machine’s acceleration vibrated through his tight limbs.
In the distance a faded sign trumpeted the town of Whitehead, and he licked his lips in anticipation at the thought of all those bodies. Warm, human bodies, and with any luck, chalk full of the female kind.
Crisp white teeth slashed through the gloom as he glanced towards his handsome companion. Scenting the air, he smiled. He’d been on the road for almost twelve hours. It was time to relax. Time to play.
Exhaling slowly, he signaled a left turn and the two bikes ate up the last seven miles in no time. The town was small, boasting a population of just fewer than five thousand. Jake usually preferred larger cities. It was much easier to blend in and fade to black, when the environment wasn’t so white bread.
Even amongst his kind he was a standout. At just over six foot five, he was tall, well muscled with colorful clan tattoos caressing biceps and abs. His blue black hair was kept short, and he currently sported a rakish Mohawk. But it was his face that was memorable, with strong chiseled features and devilish smile. Women found him irresistible, and most men just found him plain intimidating.
He pulled up to the Devil’s Den and cut the engine.

What’s under that kilt? WEDNESDAY!