SOMETHING ABOUT YOU REVIEW 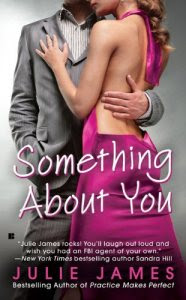 This is my first Julie James novel, and it will NOT be my last!

I don’t typically read Contemporary Romance, but when I saw this book making the rounds I had to give it a go.

Cameron Lynde is an assisant US Attorney and several years ago she helped prosecute a case that needed her to work in depth with the FBI, especially Agent Jack Pallas, who had spent months undercover and several days being tortured. The information he’d gathered before his cover was blown and he was tortured was invaluable. When Cameron presented it to her boss, the US Attorney, he decided it wasn’t enough to convict, and told her to go tell the FBI that they wouldn’t be filing charges after all.

So Cameron took the fall, and Jack, being understandable pissed, told her off on air to the news cameras that had followed him out of the building. Wow. He was almost fired for saying what he did, and ended up getting transferred to the middle of nowhere for a few years til he could go back to Chicago.

Cameron is staying in a hotel while her new flooring is installed and inadvertently witnesses a murder. Enter Jack. Uh oh. The sparks fly left and right between these two as they try to figure out who did what, and if there is a leak in either of their departments, or if it’s someone closer to them.

Meanwhile, they have this undeniable attraction to each other, yet Jack blames Cameron for ruining his career, and Cameron doesn’t want to rehash what really happened.

Something About You is a fun, suspenseful and steamy romance that I recommend to anyone and everyone who enjoys romance.

This is a great romance with a bit of suspense.