Sherry Soule is stopping by! 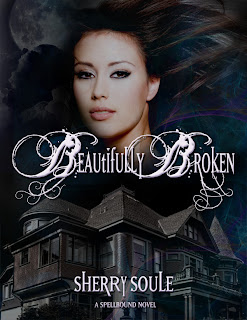 Sherry Soule, author of Beautifully Broken, a the first book in a new paranormal Young Adult series, is stopping by for a guest post and a fun contest. Take the quiz over at Got Fiction for her guest post and a chance to win her book!

They say every town has its secrets, but that doesn’t even begin to describe Whispering Pines. The townsfolk are a superstitious lot and the mystical disappearance of a local teen has everyone murmuring about a centuries old witch’s curse.

Sixteen-year-old Shiloh Ravenwolf is a heritage witch from the Broussard family, a family both destined and cursed. When she takes a summer job at Ravenhurst Manor, she discovers a ghost with an agenda. That’s where she meets the new town hottie, Trent Donovan, and immediately becomes spellbound by his charms. Yet she is determined to discover the connection between them before it’s too late.

Finally, Shiloh’s met someone who is supercute and totally into her, but Trent may be the next victim on the supernatural hit list. And Shiloh is the only person with the power to save him. Complicated much?

It sucks to have a destiny, especially since Shiloh would rather spend her summer being a normal girl who worries about clothes and boys, not the supernatural. But she’s never been

normal and the stranger things become the more her own magical senses awaken.

With cryptic messages from a pesky wraith, she will begin to understand the mysterious significance of the strange mark branded on her wrist, and decide how much she’s willing to sacrifice to protect the other teenagers in town.

Unfortunately, for Shiloh, not all ghosts want help crossing over. Some want vengeance.

Take it Off Tuesday!