Seduced by Her Highland Warrior by Michelle Willingham

Seduced by Her Highland Warrior by Michelle Willingham

Laren is a very timid and shy woman. She married the love of her life Alex, who defied his mother to be with Laren, and supposedly they lived happily ever after, right?

Well, not really. During a battle, the English burnt down their keep. Alex is now laird, and Laren is trying to get their daughters to safety. She can’t stand to leave without one last look at her husband, and she gets shot with an arrow. It’s not a horrible wound-well, for her, for me I’d pass out and whine, but I’m not a medieval woman, I’m as girlie and modern as they come 🙂 But she takes care not to show her injury thinking that Alex has enough on his plate without worrying about her.

Alex sees Laren, and after losing his home, he wants her to run to him, to kiss him, to let him see she cares he came back alive. But Laren is in so much pain, she can barely keep a brave face. Alex thinks she doesn’t care, Laren thinks she’s helping by not giving him something else to worry about…and so begins a book about a marriage where no one communicates.

At first I was really very emotionally vested in their story-I just hit my 9 year anniversary, and trust me, I’m married to the king of not communicating, so this felt very real to me.

Alex feels that as laird he needs to keep the clan together and to rebuild. Laren meanwhile has some secrets of her own. Three years before, they lost their infant son. As heartbreaking as this is for both of them, neither one talks to the other about the grief.

But as we see through some very heart-wrenching flashbacks, and through their day-to-day interaction, the two of them don’t know how to be with each other anymore.

Right about here is where Laren began to lose the sympathy card with me. She comes from nothing. From the poorest of the poor. She felt that marrying a man who was so far above her was, well, she felt like he could do much better than someone like herself. Unfortunately she kept right on believing that she was very beneath him, and not good enough for him. What bothers me about her low self-esteem isn’t that she felt that way about herself, but that after several happy years together she still had a hard time believing Alex loved her and she was worthy of him. At this point he’s become laird, and they lost their son, but they lost each other at the same time.

It took Laren being hit with an arrow for Alex to see the problems, so he tried to fix it. It was Laren who constantly stopped any attempts, because she still felt unworthy of him.

Now in order to deal with her grief over her son, she began visiting the priest who made stained-glass windows. He taught Laren, and she became a master glassmaker. Instead of taking pride in her work, she hid away and it wasn’t until she was forced to show her husband that she eventually did.

What bothered me here, is not that she wanted to make glass, but that it took precedence over everything. She refused to even attempt to speak with the women of the clan. She wouldn’t even try! She was painfully shy, I get it, but she’s been living with this clan, for what, 7 years? And Alex has been laird for most of that time, so how is it really taking that long for her to finally feel comfortable? It felt more like an excuse-Oh they’ll judge me, so I won’t get up there. I do feel the clan was judging her, but it was because she’d disappear all day and they just figured she was lounging about rather than tending to her duties. She never even tried to dissuade her people.

At around 80% in, she finally realized what it meant to be married to the laird.

“Being Lady of Glan Arrin wasn’t about giving orders to the people or putting on a false confidence. It was about taking care of your loved ones.”

Meanwhile, their toddler is kidnapped and held for ransom by a brutal man. I felt like all of their marital issues were left behind in order to rescue their daughter, but after they got her back, those issues just were cleared up. I then thought the epilogue would show how she’s functioning now as lady of the keep. But nope, I thought the epilogue was pointless-a love scene and then a huge commission for her glasswork. An epilogue is supposed to add something to the story. This added nothing. We should have seen Laren as more of a lady of the clan, rather than getting a love scene with her husband.

So my final verdict is that it was good, and I would absolutely read this author again, but I did find it very hard to connect with Laren. 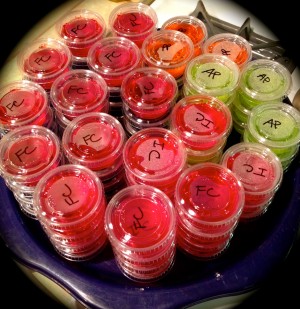 A Vampire’s Salvation by Alexis Morgan

Review: Captured by a Laird by Margaret Mallory