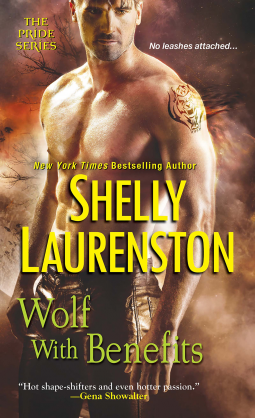 Ricky Lee has no plans of getting serious about anyone, but he will protect Toni Jean-Louis Parker. Not just because he’s been hired to do so, but because it’s the right thing to do. And if that means traveling around the country with one complicated She-jackal, dealing with chocolate-eating wild dogs, instigating trouble between his brothers, and having the most amazing sex he’s ever had…well, who said his job didn’t have perks?

Toni doesn’t know how she keeps getting herself into these situations. But even she has to admit there’s something about Ricky Lee Reed that she finds kind of interesting…and downright sexy. Now they just have to survive long enough to figure out if what they have is worth fighting for…

It looks like Kensington is repackaging Wolf With Benefits, and wow! do I approve!

I breezed right through this one, even though it’s over 400 pages. With Shelly Laurenston’s trademark sense of humor, her shifters are always fun to read.

Toni Jean-Louis Parker and Ricky Lee Reed are fun characters to read, and they’re fun to watch fall in love as they are so incredibly opposite.

Toni is the only non-prodigy in a family full of child-prodigies. When she was younger her dad used to have her help him deal with all her younger siblings (of which there are 10 I believe), and that turned into her career. Toni now spends every day knowing that her siblings, genius as they may be, can’t do anything without her. They depend on her way too much, but she likes it. She thrives on it.

She has had many jobs that she has turned down because after just a day or so, she feels the family falls apart without her. And they do to an extent, but she never lets anyone try to help her because she manages them so perfectly.

An opportunity for her mom arises that means they’ll be staying in New York for the summer. This is frustrating for Toni because it means she’ll be giving up yet another job opportunity back home, but something else comes up and she gets a job working for The Carnivores as Director of Team Travel and Promotions. She handled Novokov amazingly. She “gets” him. She also asks him to schedule her family when her job takes her to Siberia. (For anyone who knows this series, this is hysterical. For those who don’t-he’s very OCD about his schedule, so it’s funny to watch him take charge).

Ricky Lee Reed, on the other hand is a laid back country boy who works in New York now (he’s part of a security firm). He kicks back and just waits for something fun to happen, because when he’s around Toni, something seems to always happen. He’s never bored. His character was fun and sweet and sort of quietly funny. He spent most of the book dodging an ex-girlfriend from high school, and it was hysterical.

When he goes with Toni to Siberia (as security), the two of them have a lot to deal with. Bears (yes, Russian bears at that), their desire, and Toni’s first time out on her own. It’s a lot for her to handle. But Ricky Lee is there in his quiet way to help her calm down.

This book has it all; fun, action, and humor. We also are treated to some cameos from Laurenston’s Magnus series as well, and a brand new type of shifter–see spoiler below, BUT only if you truly want to be spoiled). I absolutely recommend this book to any GA Aiken or Shelly Laurenston fans. If you’re a big fan of shifters and enjoy humor in your books, I suggest this series. But I’d suggest starting at the beginning.