HE WON’T BE DENIED

Trehan Daciano, known as the Prince of Shadows, has spent his life serving his people—striking in the night, quietly executing any threat to their realm. The coldly disciplined swordsman has never desired anything for himself—until he beholds Bettina, the sheltered ward of two of the Lore’s most fearsome villains.

SHE’S BOUND TO ANOTHER

Desperate to earn her guardians’ approval after a life-shattering mistake, young Bettina has no choice but to marry whichever suitor prevails—even though she’s lost her heart to another. Yet one lethal competitor, a mysterious cloaked swordsman, invades her dreams, tempting her with forbidden pleasure.

A BATTLE FOR HER BODY AND SOUL

Even if Trehan can survive the punishing contests to claim her as his wife, the true battle for Bettina’s heart is yet to come. And unleashing a millennium’s worth of savage need will either frighten his Bride away—or stoke Bettina’s own desires to a fever pitch. . . .

This is what KC said about the cover, and wow, do I agree!

“I put in a few cover requests for this one. I wanted to have the hero looking like he’d just returned from punishing the heroine’s enemies, basically a “you mess with her, you’ll see a man get
mean” scenario. I requested mud on his grim face, a menacing stare that says “you’re next,” stuff exploding in the background, clothes all ripped up. And the art department delivered! That, my friends, is Trehan Cristian Daciano to a T! “

Half-demon/half-sorceress Bettina had her sorceri powers stolen and the crap beat out of her by Vrekeners and she’s now frightened and that fear makes her feel weak. Being the heir to a demon plane called Abaddon does nothing to quell the fear or the emptiness inside of her from her missing powers.

Her godparents mean well, so their solution is a medieval tournament where the strongest warrior will win Bettina and become king of Abaddon. Unfortunately that’s not realistic. There are trolls, deranged Lykae (who has a big role to play in a book or two), a pre-demon, and many other undesirables who once they win would hand Bettina and her kingdom over to their masters.

And then there’s the demon she loves, Caspion, who refuses to enter. The two of them have been best friends for a decade and she’s looked up to him as her white knight since she met him. Cas, however, only sees Bettina as a sister, or a dear friend. In fact, he’s a man whore who manages to get himself into some trouble with the Dacians.

Enter Trehan. He is the last of his house, one of 4 cousins in line for the Dacian throne, and the most probable choice. He’s very logical and he thinks every decision through. He’s also the one who hunts down Dacian enemies and assassinates them. Unfortunately for Bettina, Cas is his latest mission. But something incredible happens. Trehan is drawn to a light in balcony for no reason, and when he finds the lovely sorceress Bettina greeting him with drunken open arms, he not only is blooded, but absolutely thrilled that his Bride is so amenable. Until she calls him “Cas.” Oopsie.

This throws Trehan for a loop. Nine centuries for his Bride, and she’s a drunken sorceress who’s waiting for another male? Oh that just won’t work for him.

One of the things I liked about Bettina is that she has isn’t badass like the Valkyire or Lykae. In fact Bettina can barely walk outside without having a panic attack. Trehan shows Bettina that she can overcome them by finding out that greatness is inside of her, it doesn’t lie with her stolen powers. Another thing is that she realizes she loves Trehan all on her own, with his constant seduction and his gentle support. I only wish she’d realized it sooner. I think the time between differentiating her love for her childhood friend and her male, and the big fight at the end was too short-I’d have liked her to grasp that sooner.

I loved Trehan. I really really loved him. Usually heroines like Bettina annoy me, especially with her constant “I love Cas” drama, but it didn’t bother me. I mean, sure, as I said, I wish she’d gotten her head on straight a bit sooner, but other than that, I loved this whole book.

For any of you IAD fans, this is a fantastic addition to the IAD world, and as a new series, I’m expecting great things from the Dacians. 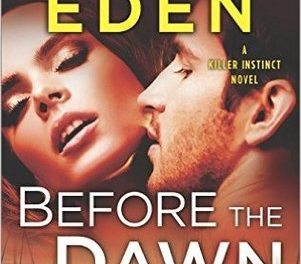