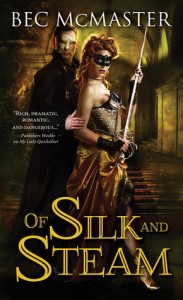 When her beloved father was assassinated, Lady Aramina swore revenge. The man responsible is well beyond her grasp, but his dangerously seductive heir, Leo Barrons, is fair game. When Mina obtains evidence proving that Leo is illegitimate, she has the means to destroy both the killer and his son, a man who troubles her heart and tempts her body.

A woman of mystery, Mina's long driven Leo crazy with glimpses of a fiery passion that lurks beneath her icy veneer. He knows she's hiding something, and he's determined to unravel her layer by silken layer. He just doesn't expect the beautiful liar to be the key to overthrowing the corrupt prince consort… or to saving his own carefully walled-off heart.

My first thought upon reading this was that it was great to be back in this world again! Bec McMaster writes so vividly and her characters are so well-written, that you can’t help but love this series!

We begin with Lady Aramina dueling. Lord Leo Barrons sees her and wants her. But what I loved about him, is that he isn’t an alphahole character. He’s a fantastic hero who wants her and pursues her, but he does it over years, giving her time and space. And most importantly, respect. At one point Mina says that she doesn’t understand his motivation. He tells her that she never has. Leo’s in love with her. And he’s patient, and he’s a good guy. You really can’t beat him for a hero.

Mina is the cold duchess who is the only female bluebood. And she’s so much more than her icy exterior. She has some incredible ideas, but she has to keep them secret. Her position is dependent upon her Ice Queen persona. She may be a bluebood, but she’s a woman, and she’s not necessarily amongst friends in the Echelon.

We see many different sides of Mina, and along with that, there are many different plots running throughout this book. The Prince Consort has gone mad, some say. Others say he’s been quite mad for a while. He’s got several cards up his sleeve as well, and as we’ve seen in the past couple books, revolution is coming. But how will it end? His human queen is at her limit, and is shutting down. If Mina helps her, will she give away her own plans?

Meanwhile, Leo has begun to embrace Blade and Honoria’s cause, knowing that the Prince Consort has to go. But he does it at his own peril, for his own position is no longer secure, thanks to Mina’s unending thirst for revenge. With both of them plotting towards the same goal, will they learn to trust each other enough to share, let alone love?

This series is an auto-buy for me. With darkly seductive description, this series will grip you tight and not let go until far longer than the last word has been read.

When She Was Naughty by Tessa Dare 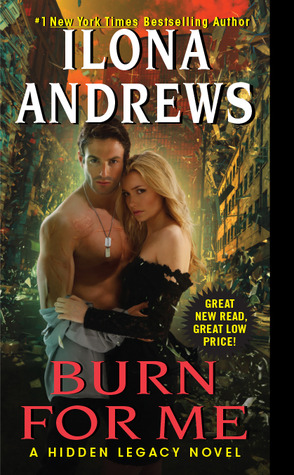