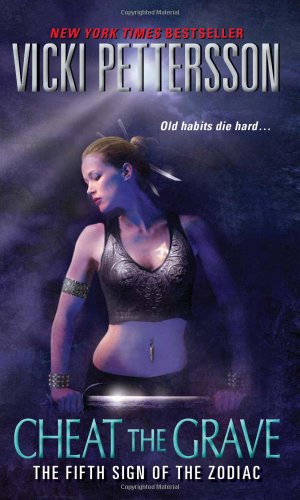 by Vicki Pettersson
Publisher: Harper Collins
Publish Date: June 1, 2010
Genre: Urban Fantasy, Paranormal
Series: Signs of the Zodiac book 5
Rating:  4 of 5 flames
Blurb from Goodreads:
Las Vegas socialite and otherwordly avenger Joanna Archer gave up everything when she embraced mortality—abandoning her powers and altering her destiny to save a child . . . and a city. Now her former allies are her enemies—and her enemies have nothing to fear.
Yet still she is bound to a prophecy that condemns her to roam a nightmare landscape that ordinary humans cannot see and dare not enter. And a beast is on her trail—an insane killer blinded by bloodlust, who’s determined to rip much more from Joanna than merely her now-fragile life. Survival is no longer an option in this dark realm where good and evil have blurred into confusing shades of gray—unless she can gather together an army of onetime foes and destroy everything she once believed in.
Book Savvy Babe’s Review:
Going into this book, I was a little nervous.  I am unfamiliar with the series, and this book is the fifth book in the series.  Needless to say, I did not have any idea what the back story was when I began reading.  While this did cause some gaps in the story while reading, I was fully able to catch up with the story, and I wasn’t lost or confused.
Cheat the Grave centers on Joanna Archer, former superhero and member of the light.  After losing her power and becoming mortal, she is abandoned and living as her dead sister.  Her only friends are her dead sisters long-time friend Cher and Cher’s stepmom, Suzanne.  Suzanne is getting ready to marry a prince, and Joanna is attending the wedding festivities, as well as trying to protect herself from the dangerous entities out to kill her.
I really liked Cheat the Grave, and Joanna.  In this book, Joanna is forced to re-evaluate her life, especially her relationships.  She has to face her grief over all that she has lost, and also consider the gifts and friends she currently has.  As Joanna progresses through the action of the story, running from mad villains, she also progresses through an emotional journey; from grief, to despair, to anger, and to determination.  I felt for the character, felt anger at the betrayals, and hopeful for new friends and paths.
The world and the supernatural characters were new and interesting.  The characters follow the stars and the zodiac, there are alternate dimensions, and their written records are comic books.  I thought that the comic book manuals were very clever.  In this installment, there was not a lot of romance, however, I understood that there was more romance in previous books, and hopefully more to come.  I really did enjoy Cheat the Grave, I will definitely read more of this series, and more books by Vicki Pettersson.  Urban fantasy and paranormal fans will enjoy this series.
Here are the books of the series (in order):