REVIEW: Born to Be Wild by Christine Warren 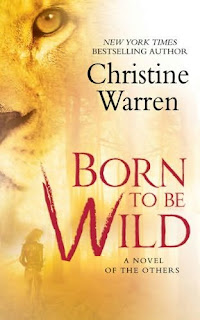 This latest installment of Christine Warren’s “Others” series was much different from her previous books. This one takes place in Oregon, and deals with a small town vet named Josie, and the local sheriff, Eli, who just happens to shift into an African lion. But the real difference from this Others book is that there is a viral outbreak that affects the lupine shifters only. Once infected, the lupine cannot shift from wolf form, eventually becoming more and more feral, until he is all vicious wolf, but intelligent like a human. The virus is man-made and wicked nasty.
In most of Warren’s Others books, there is magic, a bad guy, and a happy ending. In this one, there is a conspiracy, white supremesists, and the chance that all Lupine shifters in the world can be taken down by this awful virulant strain of rabies. The only thing keeping this story from receiving a 5 star rating is that the ending is very abrupt and while Eli and Josie get their HEA, the virus may or may not be out there still, it was hinted that the main wolf who still was infected may have been picked up for animal control and the ending was way too open-ended. It was great, and I liked the way she showed the bad guy’s perspective in the form of his scientific notes, but there were too many unanswered questions, and as she doesn’t tend to carry over the storyline from one book to the next as an Urban Fantasy might, it’s hard to say if we’ll see more of this subject.

I know I didn’t dwell too much on the romance plot, but really it was fairly straightforward. Sheriff sees vet smile and she goes from ordinary to glorious. They hook up, he realizes she’s his mate, he wants to protect her, she feels she can protect herself. They argue, they take down the bad guys, they live happily ever after the end. It was a good “outbreak” type mystery with lions, and werewolves, and skinheads, oh my! I did like it, and I liked the way Josie and Eli got together, it was cute. It just wasn’t what I’d typically expect from Christine Warren…although that woman can write a steamy love scene!