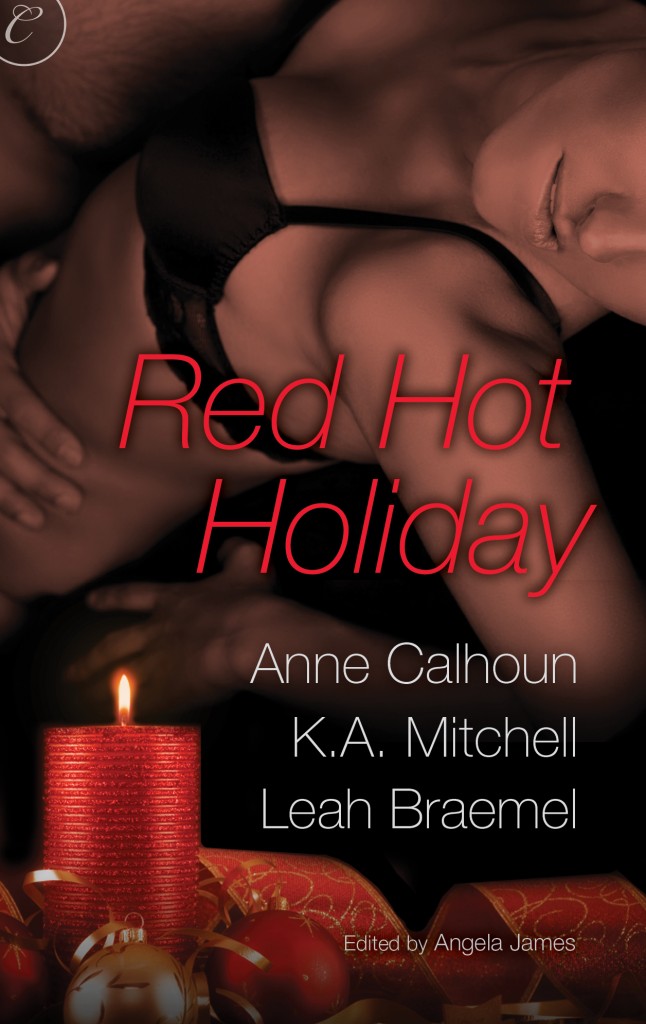 “The Wish List” – K.A. Mitchell – is about Jonah and his boyfriend Evan. Jonah loves Evan but finding a ring box in Evan’s desk drawer has him seriously wondering if he’s ready for a commitment.  He feels like something is missing and is afraid to tell Evan that he needs something “more”.  Evan loves Jonah but his Dom tendencies are something he’s been afraid to bring up, lest it frighten Jonah away.  Then Evan finds a secret fantasy kink list Jonah wrote, and now he realizes that they are both going to get what they want for the Holidays.

I liked the story, even though I find it hard to believe in this day/age that they never would’ve talked about their sexual preferences before now.  Plus I found Jonah’s constant commitment issues (he does think about sleeping with other guys ‘just to make sure’) turned me off to his character and thinking Evan deserved better.  But I got some of the reason behind both their issues, and in the end it was a really good story about two real people, going through real issues, with some really hot sex thrown in for good measure.

“I Need You for Christmas” – Leah Braemel – a twist on “Gift of the Magi” find Ryan and Megan getting together for the Holiday after months apart.  She’s a Mounty in the Arctic region of Canada and he’s a prolific artist living near Toronto.  Megan has decided to give up her dream job in order to join the provincial police in Ontario so she can be closer to Ryan.  Meanwhile Ryan has decided to give up his home and art space to move North to be with Megan.  Both have decided to sacrifice a bit of their dreams in order to not be away from the person they love.  Of course in the end, they both realize what they’ve done and everything works out.

Which makes this sound kind of sappy, but the chemistry between these two is anything but.  The story is very enjoyable and probably my favorite of the three.  And I like the twist on a classic.

“Breath on Embers” – Anne Calhoun – Ronan is a  firefighter and Thea is a widow. They’ve been “hooking” up now for months and Ronan wants to take their relationship past the bedroom, but Thea is still too wounded from the loss of her husband to even consider changing their status.  Ronan however is determined to knock through the shell of deprivation Thea has wrapped herself in and has decided there’s no time like the Holidays to make his wishes come true.  And to help Thea realize there’s still life out there, that life is meant to be experienced, and he wants to be a part of hers.

Beauty and the Blacksmith by Tessa Dare

Add Bling to that THING!