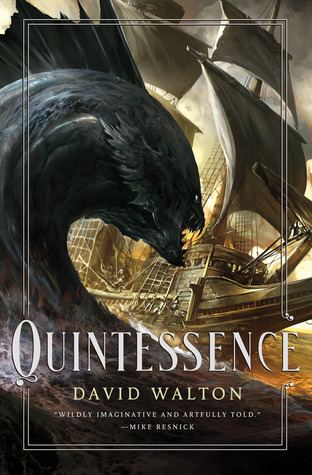 Been a while since I’ve read some good old fashioned fantasy.   I didn’t know what to expect, I admit I read it because of the cover.  Hahahaha, yes I do that.  And the description sounded intriguing:  Alchemy, Religious Zealotry, Discovery of New Worlds and Species.  You know all the good stuff.
Historically the novel is set in England during the end of Edward VI’s reign and the beginning of Mary I of England.  A ship comes in to port that had been sent out to find New Worlds and riches for England, but instead carries barrels of rocks and all the crew are dead or die within days of returning home.  The King’s physic, Dr. Parris, examines one of the bodies (illegal at that time and punishable by execution) which looks well nourished but is filled with sand and salt.  He meets a mysterious magician/alchemist named Christopher Sinclair who tells him that he spoke to the captain of the ship before he died and was told they had found a place named Horizon, full of wonder and riches beyond belief.  It also may contain quintessence – the mysterious fifth element that can create life and end death.  He shows Parris a beetle that can pass through nearly any object, and a staff that can go from being wood to a snake and back again.  Impossibilities, but truths nevertheless.
Through a series of betrayals, the rise of a Catholic monarch bent on purging her country of Protestant reform, and sheer curiosity on his part, Parris finds himself and his daughter aboard the ship and heading to Horizon.  But what will happen when they find it, if they find it?  Is there still a colony ready to welcome them?  Will they die at the hands of the creature on board, which cannot be seen?  Or will they face the same fate as the former crewmen?  Once they find this island will they try to return only to suffer the same fatal fate or will they have to stay forever?
I liked the alternate take on history. I mean the events are the same, but taking all the old superstitions of that age and making some very true.   I also like the religion versus philosophy debates and watching how men of “science” but also faith try to discover truths they cannot comprehend.  It’s cleverly done and adds to the mystery and danger.
I can’t say I like the creatures that live on the island, mostly because they sound really creepy and a lot like a cross between crabs and monkeys.  Neither of which I’m really fond of.  And at times the religious zealotry can get a little much, but during that time it was.  They didn’t call her “Bloody Mary” or have the Spanish Inquisition for nothing.
The one thing I really couldn’t reconcile was the relationship between Parris and his wife.  I get her point of view, I get his point of view and I get their daughter’s point of view but the mother really rubs me the wrong way.  Mostly because she betrays the family, and I’m a little Godfather when it comes to betraying the family.  I get that Parris put them all in danger by cutting open corpses, I get she’s a Catholic and believes in Mary’s right to rule and bring back the true religion.  Honestly I get that, but for someone who speaks of how much they love their child and wants only what’s good for them she really does a doozy of a betrayal.  Not in her mind, of course, but she comes to realize it a little too late.   I’m trying to understand how a lady of that time would think and why the family would be able to heal itself, but it’s a very thin understanding.
Overall the book is really enjoyable and a good alternate history, fantasy adventure.
*eGalley provided by Tor Books/Macmillan via NetGalley*

When a Mullo Loves a Woman by JoAnne Kenrick