Proof by Seduction by Courtney Milan 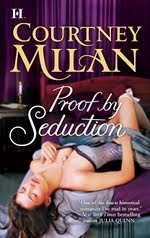 There are so few authors who can make me wish that I could hurry and reach the end of their novel so I can find out what happens, and yet at the same time make me wish that the novel would never end, because that would mean I would have to close the book once and for all. Courtney Milan is one such author. Another rarity among authors is the ability to write emotionally complex characters and not sound “clinical” while doing it. Again, Courtney Milan met that challenge head on and came out victorious with Proof by Seduction where two strangers are brought together by their desire to help one man.

Gareth, Lord Blakely and Jenny Keeble, Madame Esmerelda, were in a battle of wills – and wits – that kept the story moving at a fast pace. They were both looking out for Gareth’s cousin, Ned, who at 21 years old was – in their eyes – unable to look out for himself. And while they both wanted what was best for Ned, they had two entirely different ideas about what that was. The scheming, the plotting and the social status maneuverings made this a story in which I found myself constantly wondering what they would come up with next to test, tempt and torment each other…oh, and of course, seduce.

One of the things I really love about this book was how different it is from most romance novels in that, in most romances, whether they are historical, contemporary, paranormal or urban fantasy, there seems to be a set formula in which the heroine is almost always the one to help the hero free himself of a tormented past to become all that he can be. In Proof by Seduction, while Jenny does play this role, it starts out in a somewhat ‘less affectionate’ manner than we usually see. In fact, it’s her brutal honesty and manipulations directed at Gareth, whom she really doesn’t much care for in the beginning, which makes him start to realize what kind of man others see him as – aloof, demanding, uncaring, unfeeling…

It is Gareth’s unexpectedly honest reactions to what he learns about himself that forces Jenny to take a look at her own life – past and present – and make a choice for what she wants her future to hold.

People who follow my reviews probably get tired of hearing this, but I need to bond with the characters. I need to feel what they feel, otherwise the story is just a bunch of words to me. Courtney Milan did an excellent job of developing the characters into real people. She gave them strengths and weaknesses, qualities and flaws and she did something else that authors too often fail to do; she gave them hearts and souls. I booed their failures and cheered their triumphs. I ached for their loneliness and then delighted in their companionship. Indeed, I connected with them.

Gareth, Lord Blakely and Jenny Keeble now hold a spot on my Top 10 List of Heroes and Heroines which makes Proof by Seduction one of my all time favorite books.

Send love and appreciation to Theo!