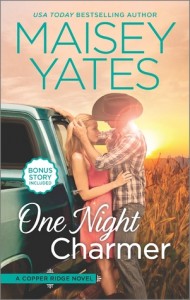 Copper Ridge, Oregon's favorite bachelor is about to meet his match

If the devil wore flannel, he'd look like Ace Thompson. He's gruff. Opinionated. Infernally hot. The last person that Sierra West wants to ask for a bartending job—not that she has a choice. Ever since discovering that her "perfect" family is built on a lie, Sierra has been determined to make it on her own. Resisting her new boss should be easy when they're always bickering. Until one night, the squabbling stops…and something far more dangerous takes over.

Ace has a personal policy against messing around with staff—or with spoiled rich girls. But there's a steel backbone beneath Sierra's silver-spoon upbringing. She's tougher than he thought, and so much more tempting. Enough to make him want to break all his rules, even if it means risking his heart…

I’m just eating up Maisey Yates’ Copper Ridge series! This is Ace’s book. For anyone following the series, Ace is the bartender who has appeared in every Copper Ridge book so far. And his book is my favorite.

Sierra West, Copper Ridge’s golden girl, is cutting off her father, and trying to live on her own, without his money. After finding out her dad had a son and then paid that son to stay quiet about his parentage (Jack’s book Bad News Cowboy), she was pissed. It tore the family apart, or more realistically, it widened fractures that had already been there. But it also forced Sierra to realize what kind of person her father really was.

So Ace hires Sierra as a waitress as a favor to Jack, but he instantly hates her. She reminds him of his ex-wife who was a piece of work. She’s wealthy and privileged, but unlike Ace’s ex, Sierra is a good person. She knows she’s had the benefit of her father’s money, and she’s making major life decisions now.

Sierra might come off as a spoiled rich brat who’s throwing a tantrum since she’s mad at her daddy, but Ace finds out she’s so much more than that. Although it takes him a long time to pull his head out and realize how amazing she really is.

The two of them are fire on the pages. What I really like is seeing how they interact, and how Sierra changes Ace’s mind about her being nothing more than a spoiled Daddy’s Girl. This was such an important part of their romance. Ace needs to see that not every woman is like his ex. And that Sierra is so much stronger than he ever gave her credit for.

Whenever I need something fun, sexy, and guaranteed to make me feel all the feels, I grab a Copper Ridge book. There isn’t one I haven’t liked.

Oh! And really quickly, before I forget, this book has a bonus novella at the end called Hometown Heartbreaker, which is the story of Aidan and Casey that came before Ace and Sierra. 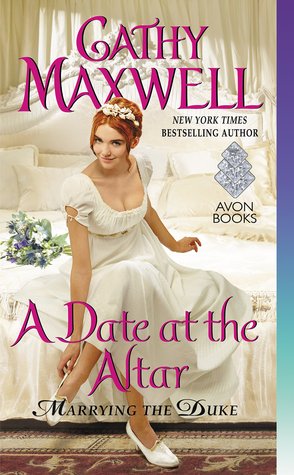