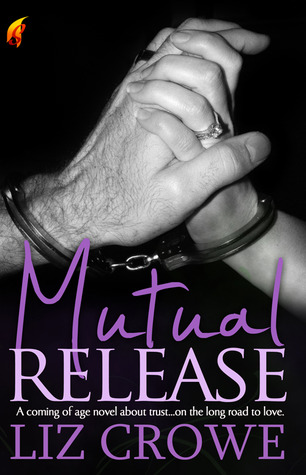 Can two dark souls ever make a light?
As president of her own distribution company, Julie Dawson has all she ever wanted — money, power, and respect. But her carefully crafted façade conceals a torment of abuse and helplessness. After years remaining emotionally aloof, she is finally independent, but alone. Because she refuses to rely on anyone but herself ever again.
Evan Adams is no stranger to success, or personal demons. The horrific trauma that destroyed his twin sister, and tore his family apart, forced him to craft a new life from the ashes of the old. He’s content enough, focusing ahead and not dwelling on his murky past. But something important is missing. He knows what that thing is but refuses to acknowledge it.
When a chance encounter brings these two strong-willed but damaged people together, what seems like a long, erotic journey through hell could lead them to a match made in heaven.
MUTUAL RELEASE
A coming of age novel about trust…on the long road to love
I like the way the book focuses on Evan’s story then Julie’s before bringing them together.  It’s an interesting change of pace to get the full backstory and not the character telling you bits and pieces. It gives you a full understanding of how they got to where they are and helps the reader to understand where they are emotionally and psychologically at the time their relationship starts.  For the most part anyway.
I’d say the first 3 parts are a good read.  There are some over dramatic moments but all in all it’s pretty “edge of your seat” stuff especially involving Damian, the kid who moves in with Evan’s family and introduces Evan to his Dom side.  But Damian is not a real Dom and more a true abuser so it takes Evan a while to find the right balance, which is a fascinating journey to read.
Julie was traumatized in her teens and has risen above it, mostly, and is a good dominant sub to Evan’s sometimes submissive dominance.  They get through the normal ups, downs and hang-ups people with their horrible pasts have and it looks like everything will be happily ever after.
Then the book just goes off the deep end of silly.
Like:
1.     Julie goes off birth control without telling Evan even though she knows he doesn’t want to be a father – guess what they break up.
2.     Julie believes Damian when he tells her awful things about Evan, despite knowing Damian’s a master manipulator and liar.  She even tells Damian to his face she doesn’t believe him then suddenly she does.  Guess what, her and Evan separate, again.
In fact in Part IV (titled “The Marriage” – take from that what you will) they separate and come back together so many times I got whiplash.  What started as two people who might be able to heal each devolves into one of the most unhealthy relationships I’ve read in a while.  And the thrown together wedding?  Just so confusing.
Sad really because it started with such promise…
I’d say read Part I because it is a fascinating story.  Parts II and III are decent enough.   Skip Part IV because I really can’t tell you what the heck went on there.

Only 5 days until we walk! Who’s with me?