Is he a hero…or the villain?

When Elizabeth Ward sees Saxon Black rushing into the backroom of The Blade—a low end bar in Miami—she isn’t sure if he’s there to save the day…or just to raise some hell. But she’s being held hostage, and he’s her best hope of survival. Within minutes, she’s away from the jerks with the guns and riding fast and hard on the back of Saxon’s motorcycle.

Saxon has been working undercover for far too long. When he finds sexy Elizabeth—with a gun to her head—he knows he will do anything to keep her safe. But once he gets her away from her abductors, the threat to her isn’t over. Someone has put a price on Elizabeth’s head, and if Saxon can’t keep her safe from the danger stalking her, then she’ll be dead.

Their lives are both on the line.

As their enemies close in, Elizabeth and Saxon must go on the run. And the longer they are together, the hotter their attraction for one another seems to burn. Saxon vows not to let anyone hurt her, no matter what he has to do, because he’s falling fast for Elizabeth. He’ll stop the killers on her trail, and then he’ll have her. Forever.

Saxon Black is my favorite hero from this series. He’s tough, he’s a bit dark, he’s possessive, and he doesn’t try to pretend to be anything different…even though his whole life is spent working undercover ops for the FBI.

This book begins with him swaggering into a biker bar, eyes on the office door in the back, ignoring all who get in his way, bringing down the guard, and interrupting an attempted murder. His comment to the man with the gun?

“I like her…How much for an hour with her?”

That isn’t exactly reassuring to Elizabeth Ward, the woman strapped to the chair. She has no idea why anyone would want her dead, and she isn’t exactly willing to take chances with the man who just tried to pay for her. But he doesn’t give her a choice when he cuts the ropes tying her down and drags her along.

Vic, Saxon’s brother (and Jasmine’s from the last book Mine to Crave), is FBI and he’s organized the rescue op. It was sort of spur-of-the-moment, so he called in Saxon since he was nearby. Once Elizabeth is safe in a crappy no-tell motel, Vic tells Sax to keep an eye on her, this is staying under the radar.

Except, someone knows where they are, and tries to finish the hit on Elizabeth. Elizabeth, for her part, has no clue why anyone would put a hit out on her. But when the major players keep turning up dead, keeping her safe gets harder and harder.

Every time they think they have a grasp on the situation, something blind sides them.

But Saxon keeps her safe. And decides that he wants to keep her. He wasn’t lying on that first page. He wants her. And he isn’t going to let go.

With the story never being predictable, and new twists around every corner, you’re kept on the edge of your seat in heart-pounding excitement from the first page.

I asked Cynthia if she was planning on writing Vic’s story, because while this book gave Sax and Elizabeth their HEA, the ending left me wanting more for Vic. I’m in luck! Hopefully his story will be out this summer! My luck on convincing her to name his woman Laurie was a little less successful ;P

***Review copy provided by the author 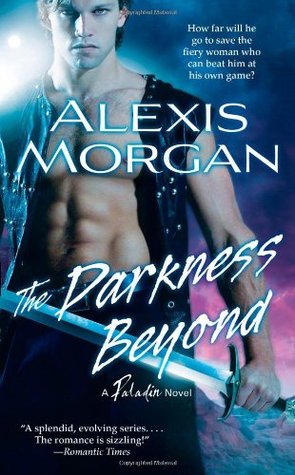 The Darkness Beyond by Alexis Morgan