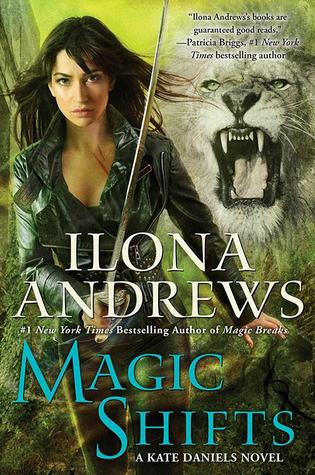 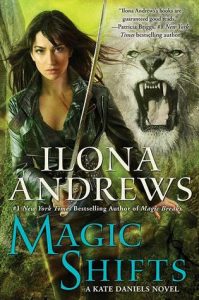 In the latest Kate Daniels novel from #1 New York Timesbestselling author Ilona Andrews, magic is coming and going in waves in post-Shift Atlanta—and each crest leaves danger in its wake…

After breaking from life with the Pack, mercenary Kate Daniels and her mate—former Beast Lord Curran Lennart—are adjusting to a very different pace. While they’re thrilled to escape all the infighting, Curran misses the constant challenges of leading the shapeshifters.

So when the Pack offers him its stake in the Mercenary Guild, Curran seizes the opportunity—too bad the Guild wants nothing to do with him and Kate. Luckily, as a veteran merc, Kate can take over any of the Guild’s unfinished jobs in order to bring in money and build their reputation. But what Kate and Curran don’t realize is that the odd jobs they’ve been working are all connected.

An ancient enemy has arisen, and Kate and Curran are the only ones who can stop it—before it takes their city apart piece by piece…

Today is my birthday, so I decided to make my husband take the kids out, and I read this book cover to cover. Ilona Andrews is one of the best writers out there. This is not opinion but fact. And I’d been saving this book for a rainy day. Guess what? It rained today 😉

With Magic Binds coming out next month, I wanted to catch up. Wow. So much has been going on since Curran and Kate left the Pack. This one begins with ghouls. Lots of ghouls. Ghouls are solitary things, so to see 3 dozen or so is notable. Kate and Curran easily dispatch all the ghouls, but soon learn that they are connected to the case they’re working on. It can’t ever be easy, can it?

Jim is the Beast Lord now, and he has other things on his plate than looking for a missing were-bison. Kate and Curran however, are in the perfect position to help George, Curran’s sister. Her father Mahon, doesn’t approve of her dating a bison. She’s a bear, and he thinks she needs to mate with another bear. But the heart wants what the heart wants.

Well, it turns out that Eduardo (the werebison) is missing, and connected to the weird ghouls activity. And the giant Kate fights, and the giant wolf griffin, and the big bad evil presence that seems to be yanking their chain. Because of course it’s all connected.

What I think I love best about this book is that we see a lot of Curran and Kate. And Julie. I swear that Julie must be pieces of their daughters’ personalities, because they really nailed her 15 year old self. I mean, seriously. She reminds me of my own daughter.

The parts with Roland really make me think he doesn’t want to kill Kate. He wants grandchildren. I really think that. I mean he met with Kate at Applebee’s for dinner for crying out loud! But Ilona and Gordon have surprised me with each book, so who knows? Maybe he really does want an all-out war? (But I don’t think that’s it…)

I think if you haven’t read the Kate Daniels series, you need to get on it. It is seriously amazing, and you won’t regret it. I know this one isn’t a Highlander book, but it gets the Highland Hussy Approved stamp. It’s just that good.

The Day of the Duchess by Sarah MacLean