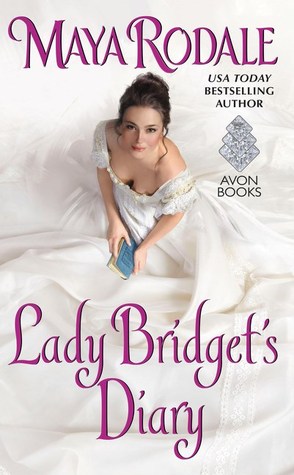 In the first novel of Maya Rodale's stunning new series, an American heiress must learn to navigate London society and an infuriatingly irresistible rake . . .

Lord Darcy is the quintessential Englishman: wealthy, titled, impossibly proper, and horrified that a pack of Americans has inherited one of England's most respected dukedoms. But his manners, his infamous self-restraint, and his better judgment fly out the window when he finds himself with the maddening American girl next door.

Lady Bridget Cavendish has grand—but thwarted—plans to become a Perfect Lady and take the haute ton by storm. In her diary, Bridget records her disastrous attempts to assimilate into London high society, her adoration of the handsome rogue next door, her disdain for the Dreadful Lord Darcy, and some truly scandalous secrets that could ruin them all.

It was loathing at first sight for Lady Bridget and Lord Darcy. But their paths keep crossing . . . and somehow involve kissing. When Lady Bridget's diary goes missing, both Darcy and Bridget must decide what matters most of all—a sterling reputation or a perfectly imperfect love.

Reading this hot on the heels of Sarah MacLean’s The Rogue Not Taken, I feel like I picked the right choice. It’s a fun and funny chaser. While MacLean went with a plot along the lines of What if they had TMZ in the Regency era? Rodale entitles this series Keeping Up With the Cavendishes. So while they have a similar concept, both books are completely different, and both are completely wonderful in their own rights.

This book is for fans of Bridget Jones’ Diary with a little Mean Girls thrown in. As much as you’d enjoy the book whether you’ve seen it or not, you’ll get more out of it if you’ve watched the movie.

Bridget’s family has just come to London from America to take over one of the oldest titles in the country, and many of the ton don’t like it. The legend states that Bridget’s father, who was brother to the Duke of Durham, stole the duke’s prize horse and left for America where he married his love and began a successful horse breeding business. Bridget, her brother the new duke, and her sisters are at the point where they haven’t fully decided to stay in England, but they feel that they need to give it a shot. Bridget especially, since she feels as if she never fit in back home. But she doesn’t fit in with the ton either.

Colin Wright, Lord Darcy, is the very epitome of an English gentleman. He has perfected that bored, disdainful look we read about, and he is simply aghast at the Durham title passing to Americans, no matter that their father was raised in England and the duke’s brother. When Bridget falls at a ball, he and his brother are there, and he’s both surprised and flummoxed that she jokes about it. She isn’t what he expected. And that bothers him. He has no room in his life for fun and funny women. He has a lady he’s pretty much expected to propose to, and she’s the perfect lady. But maybe he doesn’t need perfect?

Now, even though I liked this, and truly enjoyed the majority of it, some parts bothered me. Lady Bridget behaved like a teenager for a good portion of this book. And she’s too old for that. The “on Wednesdays we wear pink” thing gave me a little smile, and as far as the mean girls Bridget takes up with to ensure her popularity level, I didn’t mind that. There are mean girls at all ages, not just high school, so I get it. But it took up way too much of the book. She stopped being herself, and instead became a mean girl too. Not for a short bit, but for a good majority of the book. I didn’t like how immaturely they behaved. At that point this did feel like high school, not a lady in her twenties. I stopped liking Bridget.

And of course, as the title, and the movie, state, Bridget has a diary. And she fills her diary with all sorts of things. Every sort of thing. And then someone steals the diary. And blackmails her with it. But not for money, oh no, she’s blackmailed for something far more precious to her.

I like this author, and I enjoyed this book, and I really enjoyed Darcy falling for Bridget. The frenemy/mean girls aspect was the only thing I didn’t really care for. I really look forward to the next in the series, though, and I hope her brother gets a book. I really liked Bridget’s brother.

The best thing I can say about this book is that it made me go read older Maya Rodale books. I mean, I was so into the delightful world she’s created, that I didn’t want to leave! I’m so happy when I find an author with an extensive backlist!

So while Bridget bothered me when she turned into one of the mean girls she so despised, it didn’t ruin the book for me, and I am definitely excited to read the next book in the Cavendish series.

Off the Grid by Monica McCarty