Into the Night by Cynthia Eden 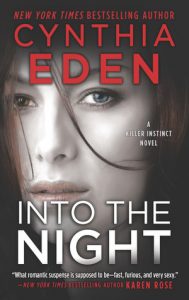 Sheltered in the shadows of the Smoky Mountains is the suspect who’s summoned FBI agent Macey Night’s fears to the surface. Every day that the “Profiler,” a vigilante serial killer, escapes justice is another day she’s reminded of what it is to be a ruthless predator’s prey. Capturing him is a craving deeper than anything she’s felt in a long time. But Agent Bowen Murphy, equal parts sexy and volatile, seems hell-bent on changing that. Working together—needing, living, and breathing each other—they’re entwined to distraction.

Bowen’s used to operating on impulse: act, don’t feel. Now Macey and the controlled terror behind her beautiful eyes has him rethinking everything, including his rule to never get close to a colleague. He’s willing to fight for a future with Macey, but the consequences of love could be deadly.

Macey Night is an FBI agent who survived a serial killer. He was a coworker, a friend, and a man obsessed with killing. “For science” because of course he had a higher calling.

When Macey escaped from him, he escaped as well. But he may have popped back up on the grid, and Macey and her partner Bowen are going after him. Years of nightmares and fear culminating to the point where they have found him. And when they arrive? Someone has beaten them to him.

While Macey and Bowen are tracking down who beat them to their serial killer, another tip comes in leading them to another serial killer on the FBI’s list. And then…yet again, someone killed him before they could arrest him. It’s as if someone is taunting them by finding their criminals first.

As the cases progress, it becomes more and more personal. With a possible serial killer targeting other serial killers, and one who always seems to be one step ahead of the FBI at that, Macey and Bowen start looking a little closer to home for their suspect. And things begin to get even more dangerous.

Meanwhile, Macey and Bowen are getting closer to each other, and when their nights heat up, their days are cooling off. Their trail on the killer goes cold. Macey is cold to Bowen. How can they start a relationship under those kinds of circumstances?

I feel like Bowen was patient, caring, and understanding with Macey. He’d wanted her for so long, but he wanted her to come to him. He didn’t want to pressure her. And when she did come to him, they combusted.

Macey for her part really wants Bowen, but she feels she’s been taken apart and put back together wrong, and doesn’t want to drop her mess at Bowen’s feet. It takes her a long time to understand he wants her, and that love is sometimes messy, and that’s okay.

I enjoyed their romance, and I really got caught up in their story. The killer was a surprise to me, and the whole plot was super intense and I was on the edge of my seat the whole time.

With her blend of thriller/romantic suspense, Cynthia Eden writes the most intense serial killers and the hottest lovers out there.

***ARC courtesy of Harlequin via Netgalley

Your Wicked Heart by Meredith Duran