An intimate chat with Charlaine Harris 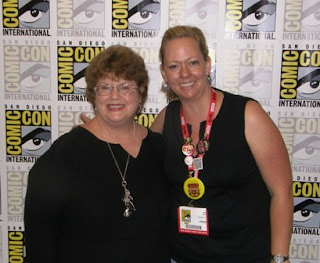 Some would think that an author that has reached the level of popularity such as she, wouldn’t be quite so down to earth. Mrs. Harris is the sweetest and most genuine person I’ve ever met. Make no mistake though, she is a no nonsense type of gal and is not afraid to speak her mind. She graced members of the press with her incredible southern charm and answered some interesting questions.


Q: What advice would you give an inspiring author?
A: I think if you want to write from the time you start reading, you are a born writer. But the desire isn’t enough. You must have the discipline and read everything you can, doing your ground work. Then you should except that the things you write for the first few years are going to be crap and you have to throw it out.

Q: Why is your cover art so different from other books in this genre?
A: The covers are designed by LISA DESIMINI and she is a fantastic artist and they really distinguish the books. I started writing these books long before there were many books in this genre. I don’t ever want to have the kick-ass chick cover, there’s nothing wrong with those books, some of them are fabulous; though I think that a kick-ass cover makes them too generic.

Q: What books inspired you as a writer?
A: I really don’t trust the word inspiration, but the earliest influences that formed me in my approach to writing were Edgar Allen Poe, Charlotte Bronte, Jane Austin and the late great Shirley Jackson. Make of that what you will, I realize that is a confused jumble of influences, but those are all building blocks.

Q: Do you know how many books will be in the series?
A: I am contracted for 13 books, but there might be more. I know how the series will end and I’ll see how I feel when I start the next book. It’s all in the journey.

Q: Is there any hopes of a side series in this world, but in another location such as Texas or Mississippi?
A: Sure, I might do a side trip into Sookie’s world. I’m considering several writing projects, maybe even a graphic novel with my friend Chris Golden. The Harper comic book series should come out sometime next year and there’s also some more exciting secret irons in the fire for my other series.

Q: Who brings out the Fan girl in you?
A: I got to meet Naomi Novik and Justin Cronin, I am just a reader and lover of writers. It’s exciting to meeting actors, but it’s the writers that really turn me on.


Q: How involved are you in the transition from book to television for True blood?
A: I’m not, my contribution lies in having written the books and selecting Alan Ball to produce them.

Mrs. Harris gave us so many great answers during the interview and even a peek at the proud mother she is, taking a text message during the interview to see if her daughter’s softball team won and boasting about her handsome and talented 23 year old son. I was delighted to share her company and talk about her books. Just in case you didn’t know, Charlaine has been a published author for over 27 years and never had a manuscript unpublished. That is one backlist I’m going to have to check out. I for one am even more a fan of the woman, then the author; it was a pleasure to share a bit of time with her and chat.

Send love and appreciation to Theo!

His Darkest Salvation by Juliana Stone

Winners of the Blogoversary Giveaway