Immortally Yours by Angie Fox

Stop by tomorrow for a guest post and an international giveaway by the author of Immortally Yours, Angie Fox. 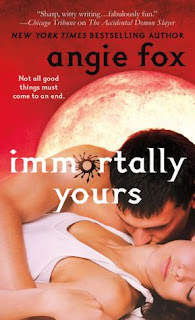 Do you guys remember that show M*A*S*H? I remember watching reruns of it with my dad back in the day. Basically it’s the day-to-day goings on in a Mobile Army Surgical Hospital during the Korean War. It was zany, but at the same time, it was serious. It was a brilliant show.
You may have noticed the series name is Monster M*A*S*H which is a play off the song, yeah, but it’s primarily a paranormal version of M*A*S*H.
The heroine Petra, is part fae, but has lived a pretty human life in New Orleans, until a few years ago. The Immortal Army recruited her. And by recruited, I mean took her. See, Petra’s a doctor who specializes in the paranormal population, and when the war between the Old Gods and the New Gods got bad, they “recruited” doctors from our world. Her tent-mates are a broody vampire and a vegetarian werewolf, both of whom are great side characters.
Petra also knows that she will never leave this hot dry land where she is forever patching up the immortal gods and their armies. She can see ghosts, but in this reality, it’s a hindrance, and absolutely nothing she’d ever tell anyone. There’s a prophecy stating that someone who can see the dead will bring about the end of the war-so any time there’s a hint of someone being able to see the dead, that person is put to death.  At one point Petra tried to force the prophecy, thinking she might be the one to end it all, but she was wrong-dead wrong.
One immortal who comes in is very badly injured, and he dies.  But she grabs, physically grabs his spirit and shoves him back into his body. That brings up some  questions: how much of that will he remember? what will he do? And once she’s touched his soul, how can she help but feel connected to him?
Gaelen wants Petra, but how can he convince her that they are fated? The dagger that she pulled out of him follows her wherever she goes, tending to lend his fate theory credence.But ever since her failed attempt at the prophecy, she tends to think fate is a bunch of crap. Gaelen has his work cut out for him.
The writing was fantastic. The humor was wry and sarcastic, the characters well developed, and the setting was so easy to visualize.I could practically feel the dry hot dust of Limbo. The descriptions were great. It’s not like 1 paragraph of flowery imagery, then back to the story, it’s more like the atmosphere is part of the dialogue and narrative. The description is almost its own character.
I recommend this to Urban Fantasy fans, to Paranormal Lite fans, and to Paranormal Romance fans. If you like your romance to have a lot of dry wit and steamy scenes, this is for you.
***ARC courtesy of the author