How to Dance an Undead Waltz by Hailey Edwards 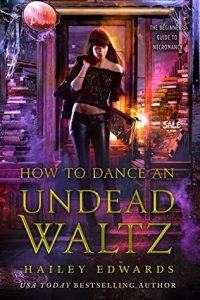 Keep a spot open on your dance card. This is one ball you don't want to miss.

Grier is nursing a broken heart after Boaz announced his engagement to another woman, but life goes on. Or it would if vampire assassins would stop taking pot shots at her every time she leaves Woolworth House. Seriously, who sends archers to deliver murdergrams these days?

To protect herself, Grier must pull out all the stops, even if it means revealing her darkest secret. All eyes are on her, and—for the first time—she begins to understand why Linus wears so many masks. But the target isn’t Grier, and when the archers single him out, it feels like one of their arrows might have struck what remains of her heart.

This book released early and I dropped everything to read it. I’m so glad I did. I was left an emotional wreck after book 3. In my last review, I mentioned that I’d never been fully sold on Boaz as a love interest. His personality annoyed me. But I wanted to give him a chance, and now I know why he didn’t work for me. He was Grier’s childhood crush. The problem with those is that as you grow up, you can grow out of them. Being that she grew from teenager to adult in a drug-induced haze in a magical prison, she’s been through some stuff. Boaz was who 16 year old Grier wanted. But who does 21 year old Grier want?

This leads us to Linus. And while I know this series isn’t romance, it’s Urban Fantasy, I feel that it’s important to notice that Grier is growing up and changing. Linus is adapting with her/for her. Boaz just steamrolled her. I’d be okay with Grier being single and finding herself, I mean, she’s so young and has only been back in the world for a few months, but at the same time, I really like Linus.

I like how Grier is assembling her own family, so to speak. She’s surrounding herself with friends she can trust, and since her best friends since childhood betrayed her, trusting is not an easy thing. But this new pack she’s making for herself seems to be good for her. Especially since she’s still making a place for herself as Dame Woolworth.

Meanwhile, there’s still a bounty on her head and every time she leaves her house, someone attempts to either kidnap her or kill her. She can’t stay cooped up in the house for the rest of her life, though. Linus has her assist him in turning someone into a vampire (remember, in this world the necromancers change people into vampires), but nothing can go smoothly can it?

Grier clearly has Power with a capital P. But when her guardian Maud realized what she was, she hid Grier’s powers from both their world, and Grier herself. In the past couple of books we’ve been seeing what Grier is capable of, and it’s gonna be huge. But I really want her to get more information. I feel like everyone is hiding something from her, and in turn us, the readers. It drives me nuts. I like watching her navigate her new life. She may have been brought up in the Society, but after 5 years in a magical prison, her outlook has changed. She sees the scheming, the power struggles, the people, all in a different light. I really loved the twist at the end. I’m incredibly curious about her mother’s side of the family, but even more so about her father’s.

I hope that she can catch a break, but in a world like hers, I have a feeling her life is going to be one challenge after another until she snaps and shows everyone what she can do. The thing of it is, I don’t know if that would be a good thing or a bad thing. But after that ball, everyone knows who her father was, and things got a bit trickier to navigate. I can’t wait to see where Ms. Edwards takes us from here.

If you haven’t started this series, you should. I am really loving the world, the characters, the magic, all of it! 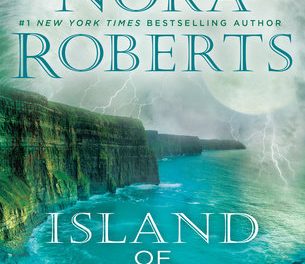 Island of Glass by Nora Roberts