Hidden by Blood by Laurie London 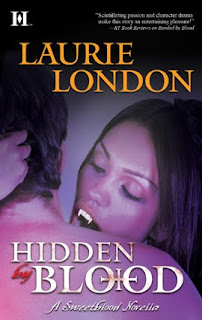 ***This is a free novella today. As of now it is at Harlequin, and will soon be available in more places. HQN link: HQN link

Hidden by Blood is a novella set right in between Bonded by Blood and Embraced by Blood.

With short stories it can be hard as a reader to find the love story believable and one of the things I liked best about Hidden by Blood is that it featured a couple who had split up. With them having a history, it not only made the relationship more believable, it gave a depth to the feelings.

Brenna had broken up with Finn because she was a vampire and he was a rare Sweetblood. She wasn’t sure she could control herself around him. And for once, the woman felt she was protecting the man by breaking up with him for his own safety.

The Darkbloods who deal Sweet capture humans with that Sweet blood and drain them dry. If they’re smart, they might hold the humans hostage for a while, only taking a few vials every couple weeks or so. Unfortunately that’s what happened with Finn. For a few months.

Brenna was at a scholarship ceremony that was being held in a remote location. While wandering about looking for a spot where her phone would get service, she smelled Sweet. Following the scent, she found her ex, Finn, chained to a cot and half starved and beaten.

Saving him from the Darkbloods was just the beginning. He figured out she was a vampire pretty quickly (thank goodness he wasn’t completely oblivious!), but they still had a few more obstacles to overcome.

I liked seeing Dom again, and Lily is in here too. I love seeing a great human hero when we have a female vampire. Sometimes it’s too hard to make a good human male when the heroine is the stronger of the two. But Laurie’s hero was great (and Scottish! I’d take him in a heartbeat! Yum!)

My only complaint is that it was too short. Luckily Laurie has said we might be seeing more of this couple in future books! Here’s hoping!

Thanks to Laurie for this ARC. We’ll be hosting Laurie London and Erin Kellison here at demonlovers for a blog tour, starting the 15th

Lord of Shadows by Alix Rickloff

Fear For Me by Cynthia Eden

Search for the next Book cover model!