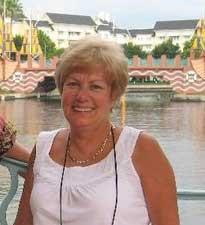 Four years ago, Jennie Brooks and Sheriff Brae Colton were engaged to be married—then Jennie disappeared without a word.

Leads to a mysterious reunion…

Brae hated Jennie for deserting him just as they were set to begin their life together. But when he finds her badly injured in a hit and run accident on a snowy mountain road, he can’t deny the love he’s never forgotten—until she regains consciousness with no memory of her identity, or what they once shared.

Where love holds the key to everything…

Brae wants to know why Jennie’s come home. Despite everything, she’s still the woman he fell in love with in high school—the woman he’s falling for again. But when the bullets start flying, his first priority is to protect her and catch her would-be killer. And if they can’t find a way to restore her memory soon, they may both end up dead.

As a little girl in Scotland, Margery loved reading the words in books, and using those words even when she had no idea what they meant. Within the pages of those books, she lost herself in the fantasy worlds the authors created. But she had no idea that someone – a real, live person – was writing the stories that enthralled her. And it never occurred to her that she could write stories, too.

When her family left Scotland and settled in Canada, she began to write – not stories, but long, rambling letters to her grandparents. Looking back, they were really mini-novels, filled with her adventures and tales of growing up in a new country. In school, she loathed English class. So what was she destined to be?

Yes, you guessed it. A writer. It wasn’t until her children left home, that she started writing and seriously pursuing a new career as a published author. These days, she’s lucky enough to be able to combine her love of travel (thanks to her father’s wanderlust) and writing by personally researching the settings in her books. Now, she live on a lake and she’s lucky enough to wake up to a gorgeous view every morning. When she’s not writing, she can usually be found wielding a pair of knitting needles or a pool cue.

Oh, and dealing with that wanderlust thing…

Chapter Sixteen
Brae’s fists  flew, harder and harder. His breath came in short gasps.
Sweat poured down his forehead even though the temperature
was barely above zero.
The hay bale was in shreds, but still, he kept punching at it. He
had to get rid of the anger boiling inside him. The hurt that made
his chest feel as if someone had taken a pitchfork to it.
He understood the anger. He’d seen it in his father often
enough growing up. The difference between him and his father
was that he took out his fury on inanimate objects, not on the
people he supposedly loved. Over the years, he’d wondered if
there might come a day when he’d want to lash out at the person
who’d angered or hurt him instead of a hay bale.
He’d just found out. He couldn’t remember ever being this
angry, this hurt, before in his life. Yeah, Jennie leaving him had
stung, but that was nothing compared to the pain he felt right now.
Now he knew the truth. She’d been bought off.
And furious as he was, he hadn’t lashed out at her. He’d
walked away. In a sense, the knowledge gave him a newfound
freedom. He’d always wondered if he’d inherited his father’s
violent temper, wondered what it would take to bring it out.
At least now he knew. His father hadn’t passed on that gene, or
whatever it was, to him.